What Do the Election Results Mean for the Keystone XL Pipeline? 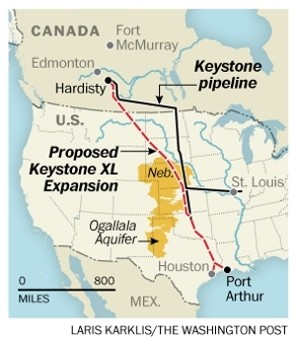 Things look set to move forward, according to Reuters:

Senate Republicans will charge ahead early in 2015 with a bill to approve the long-stalled Keystone XL oil pipeline from Canada, a move that would back President Barack Obama into a corner and set the tone for how the party taking control of Congress will govern the next two years.

The $8 billion project would deliver heavy Canadian oil sands crude from Alberta to Nebraska and make it easier to deliver oil from North Dakota’s Bakken region to the U.S. Gulf Coast. It has languished for six years awaiting presidential approval, which is needed because the pipeline crosses a national border.

Legislation earlier this year to approve the pipeline in a proposed end-run around the administration already had an estimated 57 votes in the 100-member Senate, and is now thought to have a filibuster-proof 61 votes after Republican gains in Tuesday's mid-term elections.

[...]  Keystone legislation would also force Obama to either veto a measure with bipartisan support, or let a project advance that he has vowed to stop if certain emissions criteria are not met.

[...] The pipeline has become a symbol for environmental groups and the oil industry, galvanizing the green movement and forcing the White House to focus on climate change.  For industry, the delay in its approval has come to represent what they say is the Obama administration's over-regulation and hindering of energy development.

Listed below are links to weblogs that reference What Do the Election Results Mean for the Keystone XL Pipeline?: