In this paper we provide a new defense for one of the most criticized ideas in land use law, that city plans should constitute settled deals about the proper uses of land that should be sticky against subsequent zoning amendments. In the middle of the last century, several prominent scholars argued that courts should find zoning amendments that were contrary to city plans ultra vires. But this idea was largely rejected by courts and scholars alike, with leading figures like Carol Rose, Robert Nelson and Bill Fischel arguing that parcel-specific zoning amendments provide space for the give-and-take of democracy and lead to the efficient amount of development by encouraging negotiations between developers and residents over externalities from new building projects. Their case against plans and in favor of deals suggested that zoning authorities act either as arbiters in land use disputes or as agents for existing residents to encourage negotiated solutions.

We argue, by contrast, that the dismissal of plans was shortsighted and has helped contribute to the excessive strictness of zoning in our richest and most productive cities and regions, which has driven up housing prices excessively and produced outcomes that are economically inefficient and distributively unattractive. In contrast with both planning’s critics and supporters, we argue that plans and comprehensive remappings are best understood as deals. Plans and remappings facilitate trades between city councilmembers who understand the need for new development but refuse to have their neighborhoods be dumping grounds for all new construction. Further, by setting forth what can be constructed as of right, plans reduce the information costs borne by purchasers of land and developers, broadening the market for new construction. We argue that land use law should embrace a version of plans as a procedural tool that packages together policies and sets of zoning changes in a number of neighborhoods simultaneously through procedures that make such packages difficult to unwind.

We conclude by arguing that modern property law scholarship has failed to recognize that real property law is now substantially a public law subject and should be studied using the tools of public law. Leading scholars, most notably Tom Merrill and Henry Smith, have developed sophisticated tools for analyzing the ways in which the common law of property is designed to reduce information costs, which we employ here. But the field has ignored the fact that the common law of property is far less important than it once was as a method for regulating real property ownership and use. Legislatures and administrative agencies at a variety of levels determine most of the rules governing how real property is used and purchased. In order to understand how today’s property law increases or reduces the information costs facing owners, users, potential purchasers and third-parties to property, the field must make an “institutional turn,” studying the likely effects on policy of different institutional arrangements and procedures.

Map of the Day: The Wealthiest Person in Each State 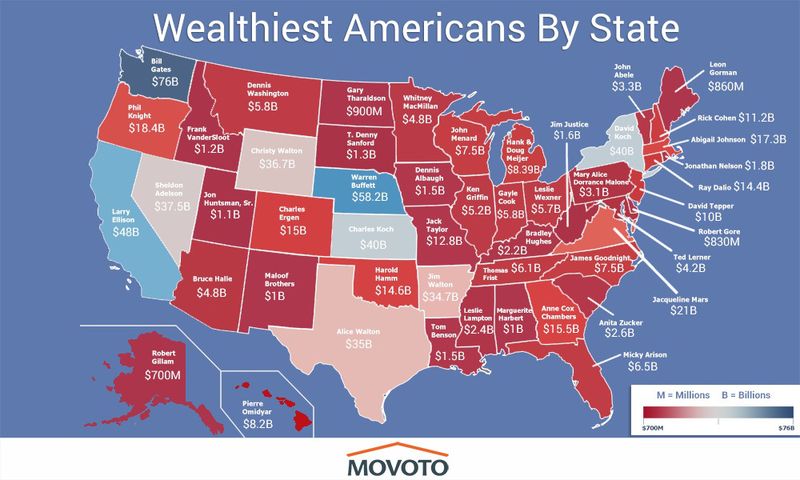 Who Owns This Monkey Selfie? 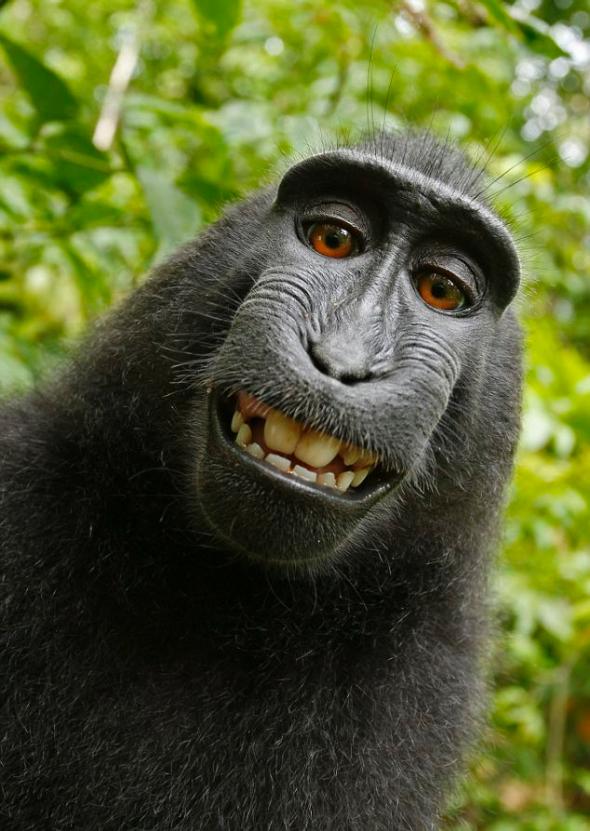 Wikimedia, the US-based organisation behind Wikipedia, has refused a photographer’s repeated requests to remove one of his images which is used online without his permission, claiming that because a monkey pressed the shutter button it should own the copyright. British nature photographer David Slater was in Indonesia in 2011 attempting to get the perfect image of a crested black macaque when one of the animals came up to investigate his equipment, hijacked a camera and took hundreds of selfies.

Many of them were blurry and some were pointed at the jungle floor, but among them were a handful of fantastic images - including a selfie taken by a grinning female macaque which made headlines around the world and brought Mr Slater his 15 minutes of fame.

“It’s a great final-exam question for a copyright class,” says June Besek, executive director of the Kernochan Center for Law, Media, and the Arts at Columbia Law School. “Under the copyright law as it’s been interpreted, there has to be human authorship for there to be copyright. So I would say there isn’t copyright on the photo.”

But didn't Slater play an important role in the photo’s production, by providing the camera to the monkey?

Not really, Besek says. Authorship of a photo usually involves choosing the perfect angle, moment, and light. “If the situation were different—so the photographer set up a jungle photo, and the photographer stepped out for a smoke, and the monkey ran up and pressed the button, then I would say yes, there is human authorship,” Besek says. A macaque grabbing your Nikon isn’t good enough.

“The photographer doesn’t own it. And the monkey doesn’t, either. It’s in the public domain,” says Chris Sprigman, a law professor at New York University. "To copyright a work, an author needs to show they produced it through their own creativity. It doesn’t matter if you traveled thousands of miles to capture a photo if you weren’t involved in actually snapping it.

Poverty in the Suburbs

Slate has a quick summary of the rise of poverty in America's suburbs.  Take home points:

But some time around the dot-com bust and 2001 recession, the number of poor people living in the suburbs actually outstripped the total residing in cities. So why is suburban poverty often treated as out of sight, out of mind?

One reason may be that it’s more diffuse. In urban areas, the poor are often packed into predominantly low-income neighborhoods. In the 'burbs, they’re generally scattered through more economically diverse communities. In other words, the U.S. suburbs are home to lots of impoverished people, but they’re not home to lots of slums. [...]

That’s beginning to change, though, according to a new brief by Elizabeth Kneebone of Brookings. During the 2000s, suburban poverty not only grew—it also became more concentrated. In 2000, 27 percent of poor suburbanites lived in neighborhoods with a poverty rate of at least 20 percent. During the 2008–2012 period, the figure was about 38.3 percent.

This essay is the introductory chapter to Intellectual Property and Property Rights (Edward Elgar, 2013), which contains some of the leading articles published in recent years on the nature of patents, copyrights, trademarks and trade secrets as property rights. But this essay does not merely review the articles. For the first time in a single essay, it presents the three basic analytical frameworks in which intellectual property rights are defined or justified as property rights – historical, conceptual, and normative.

Q. What is a co-op board’s responsibility when a divorcing couple makes a request to transfer the shares from husband and wife to just the husband’s name?

A. Divorces are frequently messy affairs, and a co-op board can easily get dragged into the drama. So, when dealing with divorce, tread carefully. Just as most divorcing couples need a lawyer, a co-op board would be wise to enlist its lawyers, too.

“By definition it gets tricky,” said Arthur Weinstein, a real estate lawyer who has represented many co-ops dealing with warring spouses.

If a couple wants to transfer jointly held shares to one spouse, the board should require that the couple provide a financial disclosure statement to show that the remaining spouse can still afford to pay the maintenance. This may require the divorce decree and supporting documents. If the spouse does not have adequate resources, the board could require that additional money be set aside in escrow or ask the former spouse to provide a guarantee.

Mulvaney on the Future of Progressive Property

In his thought-provoking recent article, "The Ambition and Transformative Potential of Progressive Property," Ezra Rosser contends that, in the course of laying the foundations of a theory grounded in property’s social nature, scholars who participated in the renowned 2009 Cornell symposium on progressive property have “glossed over” property law’s continuing conquest of American Indian lands and the inheritance of privileges that stem from property-based discrimination against African Americans. I fully share Rosser’s concerns regarding past and continuing racialized acquisition and distribution, if not always his characterization of the select progressive works he critiques. Where I focus in this essay, though, is on the fact that, in the course of articulating his claim that these select progressive works have failed to attend sufficiently to matters of acquisition and distribution, Rosser wavers on whether a system of private property has the very capacity to play even a small part in fostering meaningful progressive change.

After setting forth my understanding of Rosser’s contribution in the first part of the essay, I use the remaining pages to express slightly more confidence than does Rosser in property’s potential to serve a role in furthering a progressive society. If property is to serve in this role, however, I suggest that it seems important to redesign and reinterpret it in accord with three themes — transparency about property rules’ value-dependence, humility about the reach of human knowledge and the mutability of our normative positions, and a concern for the socioeconomic identities of those affected by resource disputes — themes that underlie a broader set of writings than Rosser considers within the contours of “progressive property scholarship” and on which I offer some very preliminary impressions.

Aspen Moves to Cut Out Bookstores With Casebook Connect

I have since learned that this isn’t possible. Aspen is only allowing bookstores to sell the $223 traditional print version. If students want to obtain the $182 “casebook connect” version, they have to buy it online, and have it shipped to the school. For some reason, the 8th edition is not yet showing up on the Property catalog page, which is a problem because classes start in two weeks!

I should stress that none of this was made transparent by Aspen. I only found this out through my diligent campus book store who filled me in on the details. I was previously under the impression that both books could be sold in the store, which is not correct. #AspenGate continues.

In honor of the beginning of the month, here are the most downloaded property articles on SSRN over the last 60 days:

1.  [188 downloads]  How to Do Things with Hohfeld
Pierre Schlag (Colorado)

8.  [86 downloads]  The Stripping of the Trust: A Study in Legal Evolution
Adam S. Hofri-Winogradow (Hebrew U.)