Map of the Day: How Tight is Your State 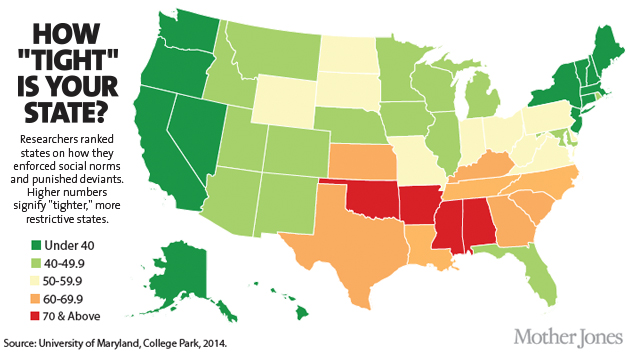 It is obvious to anyone who has traveled around the United States that cultural assumptions, behaviors, and norms vary widely. We all know, for instance, that the South is more politically conservative than the Northeast. And we at least vaguely assume that this is rooted in different outlooks on life.

But why do these different outlooks exist, and correspond so closely to different regions? In a paper recently published in the Proceedings of the National Academy of Sciences (and discussed more here), psychologists Jesse R. Harrington and Michele J. Gelfand of the University of Maryland propose a sweeping theory to explain this phenomenon. Call it the theory of "tightness-looseness": The researchers show, through analysis of anything from numbers of police per capita to the availability of booze, that some US states are far more "tight"—meaning that they "have many strongly enforced rules and little tolerance for deviance." Others, meanwhile, are more "loose," meaning that they "have few strongly enforced rules and greater tolerance for deviance."

Listed below are links to weblogs that reference Map of the Day: How Tight is Your State: