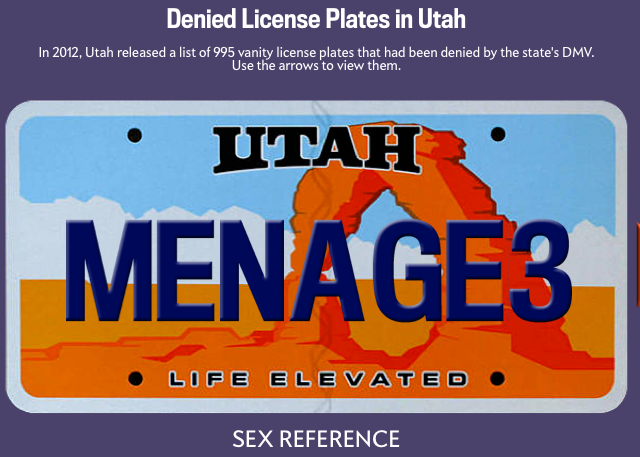 As we've covered before, some states grant individuals a property interest in their license plate numbers.  That does not mean, however, that private citizens have the right to choose any plate number they want.  Slate has a fluffy piece that catalogues the 995 applications for vanity license plates that the State of Utah has recently rejected:

Like many states, Utah reserves the right not to issue plates that its Division of Motor Vehicles deems inappropriate, either because the plate is obscene, offensive, or otherwise untoward.

Of course, obscenity is famously difficult to define, and some aspects of Utah’s personalized plate laws are easier to interpret than others. The state has issued a more-or-less blanket ban on the number 69, unless “used in a combination with the vehicle make, model, style.” This rule triggered the rejection of at least 39 license plate requests—including 69METS, a seemingly innocuous nod to the New York Mets’ first World Series championship in 1969. But most of the rules are a bit vaguer, leaving it to state officials to know an offensive plate when they see one. Often, the obscenity is plain as day, as in the cases of CARGASM, SKISLUT, and NAZI. Other applicants are cleverer, though not cleverer than the DMV’s watchdogs, who caught MLHICLB, FAHQUU and TIH2TA3 (read that last one backwards).

Listed below are links to weblogs that reference License Plate Follies: