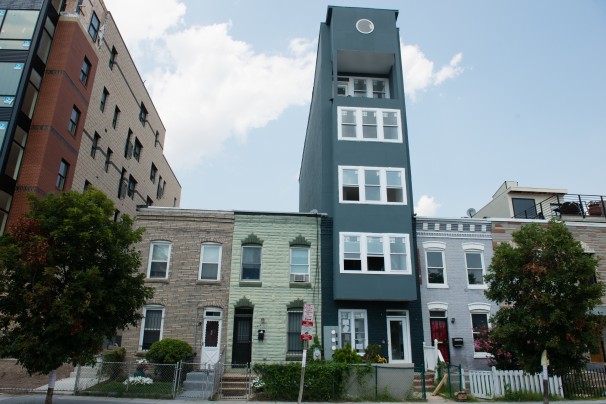 A great article in the Washington Post on the backlash against renovated townhouses that look to take maximum advantage of D.C.'s limitations on building height.

They’re like skyscrapers in small villages: renovated townhouses — but between 40 and 65 feet high — right next to squat, two-story rowhouses in Washington neighborhoods from Petworth to NoMa to Adams Morgan.

Their common nickname: pop-ups. Their common epithet among neighbors and on local blogs: monsters. Middle Fingers.

These skyward-extending residences are spreading across the city, fueled by small developers eager to cash in on the District’s real estate boom and seize any inch of available real estate, which these days means vertical empty space. Though developers have the right to build upward — and say they are providing needed housing stock — the city is evaluating how it can ensure that pop-ups in some neighborhoods reflect their community’s character.

[...] Anyone can drive around the District and find them. The five-story building at 1013 V St. NW dubbed “the Monster” is the most notorious. But the pop-up bible is the PoPville blog, which for several years has chronicled the advance of pop-ups with the same curiosity people had when McMansions began cropping up on old farms in Northern Virginia. (The “PoP” in the blog’s name stands for Prince of Petworth, the Web site’s original name.) Dan Silverman, the site’s publisher, frequently posts his and readers’ comments, along with photographs of some of the more unusual buildings.

Listed below are links to weblogs that reference Developers Turn Rowhouses Into Middle Fingers?: