The Global Market for Real Estate

A million dollars doesn't go as far as it used to: 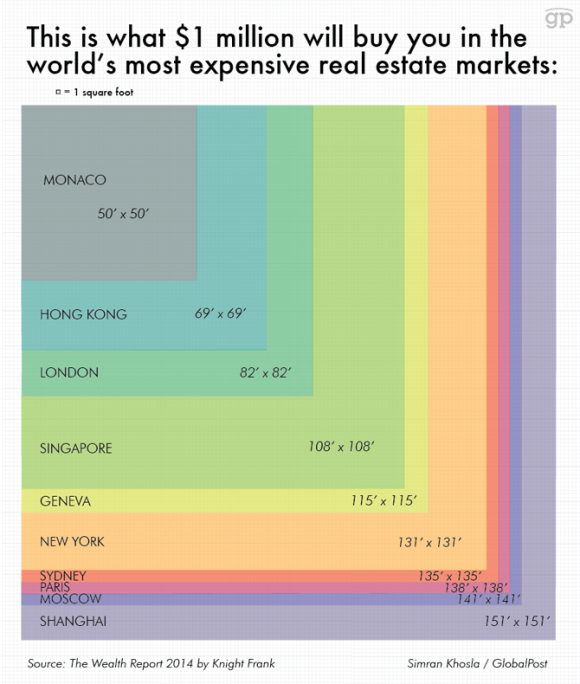 The New Yorker takes a look at the real estate market in Vancouver:

The most expensive housing market in North America is not where you’d think. It’s not New York City or Orange County, California, but Vancouver, British Columbia.

[...] Almost by chance, the city has found itself at the heart of one of the biggest trends of the past two decades—the rise of a truly global market in real estate. We’re all familiar with the stories of Russian oligarchs buying up mansions in London, but this is a much broader phenomenon. A torrent of capital from wealthy people in emerging markets—from China, above all, but also from Latin America, Russia, and the Middle East—has flowed into the real-estate markets of big cities in other countries, driving up prices and causing a luxury-construction boom. A recent report by Sotheby’s International Realty Canada examined more than twelve hundred luxury-home sales in Vancouver in the first half of 2013 and found that foreign buyers accounted for nearly half of sales.

[...] The challenge for Vancouver and cities like it is that foreign investment isn’t an unalloyed good. It’s great for existing homeowners, who see the value of their homes rise, and for the city’s tax revenues. But it also makes owning a home impossible for much of the city’s population.

The piece concludes by suggesting that Vancouver might want to levy a tax on foreign owners or restrict them from making real estate purchases.  That seems like a really really terrible idea.  Why not just roll back some of the zoning restrictions in places like New York or San Francisco or Vancouver and increase the supply of housing?  We should be celebrating, rather than lamenting, that rich foreigners want to pay (North) Americans to build expensive stuff.

Listed below are links to weblogs that reference The Global Market for Real Estate: