How We Think About Place

Every book "about Africa" has the same cover: 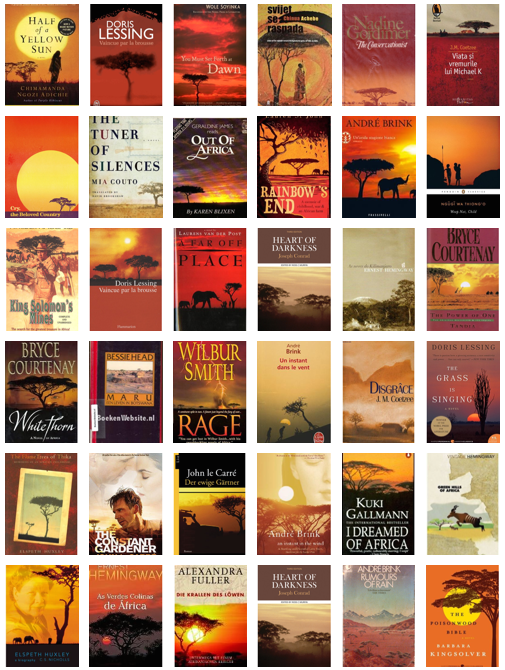 Michael Silverberg unpacks the image, first put together by the blog, Africa is a Country:

The texts of the books were as diverse as the geography they covered: Nigeria, Zimbabwe, South Africa, Botswana, Zambia, Mozambique. They were written in wildly divergent styles, by writers that included several Nobel Prize winners. Yet all of books' covers featured an acacia tree, an orange sunset over the veld, or both. "In short," the post said, "the covers of most novels 'about Africa' seem to have been designed by someone whose principal idea of the continent comes from The Lion King." [...]

I asked Peter Mendelsund—who is an associate art director of Knopf, a gifted cover designer, and the author of a forthcoming book on the complex alliances between image and text—to help me understand how the publishing industry got to a place where these crude visual stereotypes are recycled ad nauseam. (Again and again, that acacia tree!)

He points first to "laziness, both individual or institutionalized." Like most Americans, book designers tend not to know all that much about the rest of the world, and since they don't always have the time to respond to a book on its own terms, they resort to visual cliches. Meanwhile, editors sometimes forget what made a manuscript unique to begin with. In the case of non-Western novels, they often fall back on framing it with "a vague, Orientalist sense of place," Mendelsund says, and they're enabled by risk-averse marketing departments.

Listed below are links to weblogs that reference How We Think About Place: