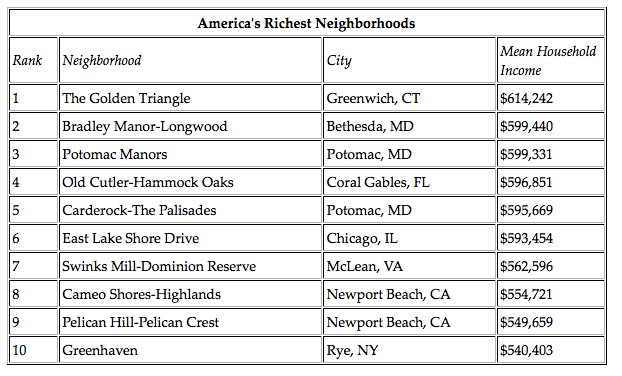 The Atlantic Cities Blog has a great write-up about the wealthiest neighborhoods in the country:

In large part, America’s wealthiest neighborhoods are its toniest suburbs. Many of them are even referred to by the country club that defines them – like Glencoe, Illinois’s Skokie Country Club, or Greenwich’s Stanwich Club, or Bethesda’s Burning Tree Club.

That said, a number of urban centers show up on the broader list and . . . their attractiveness for the richest Americans has grown substantially since 2000.  [...] Significant chunks of Manhattan’s Upper East Side and Upper West Side, as well as Soho, Tribeca, Chelsea, the Village and Battery City Park in Lower Manhattan, number among America’s 1,000 richest neighborhoods. Two gentrified areas of Brooklyn, Cobble Hill and Dumbo, appear on the list too. Across the country, in increasingly pricey San Francisco, center-city neighborhoods like Balboa Terrace, Presidio Heights, Russian Hill, and Inner Richmond also number among the 1,000 wealthiest.  [...]

America’s wealthiest neighborhoods are also concentrated in a relatively small number of metros across the country. (The table below shows the top dozen metros with the largest numbers of super-rich neighborhoods according to Highley’s analysis.) Nearly a quarter of them are in the New York metropolitan area. Another ten percent (102) are found in Greater Washington, D.C. The Bos-Wash corridor — including D.C., Baltimore, Philadelphia, New York, Hartford, Providence, Worcester, and Boston — accounts for 41 percent. On the West Coast, greater L.A. (including Orange County) is home to 9 percent, and the Bay Area as a whole (the Combined Statistical Area that includes Oakland and San Jose) accounts for another 6 percent.

For a more detailed analysis, see Stephen Higley's comprehensive report on America’s 1,000 richest neighborhoods. Higley put together his list using data from the  American Community Survey, identifying contiguous block groups (a subdivision of census tracts) with a mean household income of $200,000 or more.

Listed below are links to weblogs that reference America's Richest Neighborhoods: