Rich People Own a Lot of Stuff. Should Anyone Care? 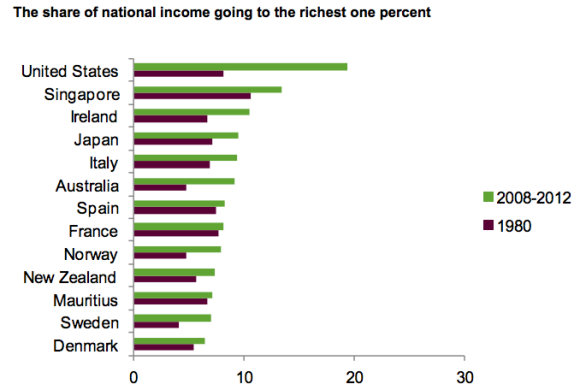 The Atlantic takes a look at Oxfam's report on global inequality and pulls out some pretty amazing facts and figures.  For example, they highlight that the richest 85 people in the world own more wealth than the bottom half of the entire global population.  The bottom half includes about 3 billion people.  But, if things keep improving for the world's very poorest, is this really a problem? Maybe not:

But the chasm in investment wealth between rural Mozambique and Manhattan's financial district isn't necessarily the problem that the international development is or should be focused on. As Bill and Melinda Gates wrote in their annual letter, "the world is better than it has ever been." Cities like Mexico City, Nairobi, and Shanghai have been transformed in the last generation from dens of poverty to thriving international markets. In the letter, the Gates' make a big prediction:

By 2035, there will be almost no poor countries left in the world. Almost all countries will be what we now call lower-middle income or richer. Countries will learn from their most productive neighbors and benefit from innovations like new vaccines, better seeds, and the digital revolution. Their labor forces, buoyed by expanded education, will attract new investments.

Listed below are links to weblogs that reference Rich People Own a Lot of Stuff. Should Anyone Care?: