The Changing Nature of Wealth in the US or ... Why the Civil War was Inevitable 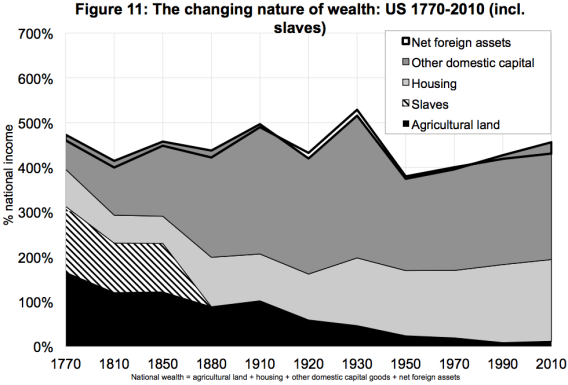 This chart, from a new paper by Thomas Piketty and Gabriel Zucman (PDF), demonstrates how drastically  the nature of wealth has changed in this country over the last two centuries.  It also shows in plain terms that anyone who thinks slavery could have ended with compensated emancipation is a fool. The value of the slaves held in the south surpassed the value of all the industrial capital ("other domestic capital") of the entire country in 1850.  As Matt Yglesias notes, "When you consider that the institution of slavery was limited to specific subset of the country, you can see that in the region where it held sway slave wealth was wealth."

Here's another, more specific, quote from Roger Ransom's "The Economics Of The Civil War":

One "economic" solution to the slave problem would be for those who objected to slavery to "buy out" the economic interest of Southern slaveholders. Under such a scheme, the federal government would purchase slaves. A major problem here was that the costs of such a scheme would have been enormous. Claudia Goldin estimates that the cost of having the government buy all the slaves in the United States in 1860, would be about $2.7 billion (1973: 85, Table 1). Obviously, such a large sum could not be paid all at once. Yet even if the payments were spread over 25 years, the annual costs of such a scheme would involve a tripling of federal government outlays.

Listed below are links to weblogs that reference The Changing Nature of Wealth in the US or ... Why the Civil War was Inevitable :

The decline of slave capital in the diagram might be misleading. When slaves were freed, the owners lost their capital, but the former slaves gained it. Given the positive incentive effects of owning the rights to one's own labor, this transfer would add to the total stock of capital if we are to include human capital in the accounting. My brief search through the source paper did not indicate that this transfer was accounted for in their numbers.