What Should the City of Austin Do With All the Stuff Named After Lance Armstrong? 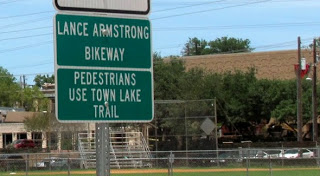 A conversation begins in the nation's fastest growing city:

The marks of Armstrong are all over downtown Austin, from Mellow Johnny’s Bike Shop (maillot juane — yellow shirt) to the Juan Pelota  — Johnny One-Ball — Cafe. And then there’s the Lance Armstrong Bikeway, which runs down Cesar Chavez St down by the river on the city’s southern downtown side.

Mayor Lee Leffingwell has consistently said that he has no plans to rename it, and after Armstrong’s interview aired on Oprah Winfrey’s network last night, he issued a statement reiterating that position.

[But] It’s a path that commemorates a cheater, and a particularly devious and evil cheater. All seven of his Mellow Johnnys are tainted and have been stripped. Armstrong built the sport of cycling in central Texas and across America with his story of overcoming all odds to become a champion. He has now destroyed that sport and its reputation for a generation. Armstrong destroyed the reputation of anyone who dared to expose him, with smears and lawsuits. The very cancer that Mayor Leffingwell cites in his statement is probably Armstrong’s own fault, a side effect of his doping.

Listed below are links to weblogs that reference What Should the City of Austin Do With All the Stuff Named After Lance Armstrong?:

Something other than what was done with the JoePa monument at Penn State:
http://www.thefacultylounge.org/2012/07/monument-removal.html