The Elusive Keys to Gramercy Park 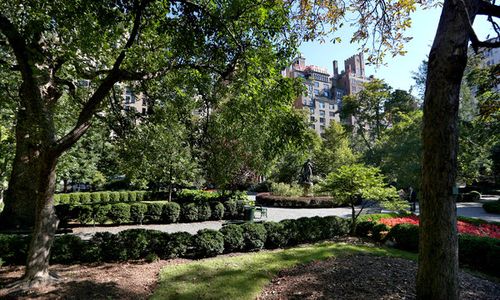 Fascinating piece in the New York Times over the weekend about the only fenced and gated, private park in Manhattan -- Gramercy Park.  The focus of the article is the limited access to the park, exemplified by the 383 numbered keys granted to residents of the 39 buildings which surround the park and pay the annual assessment.  The two-acre park was established in 1831 by Samuel Ruggles as an ornamental park to be enjoyed by the residents of the mansions which lined it.  Gramercy Park has been fenced since 1831 and locked since 1844.  Lots of interesting historical details in the article about how the keys are made, distributed, and managed.

Beyond the history, the most interesting thing to me about the article was the drum beat of thinly veiled criticism of the existence of a private park.  For example:

"Parkside residents rationalize that their communal front yard is privatized for its own protection. Besides, they, not the city it enhances, have footed its bills for nearly two centuries."

"For connection-challenged mortals, though, the park is increasingly problematic to appreciate from within ..."

"So unless you are among the fortunate few to rent or own property directly on Gramercy Park; are a member in very good standing of the National Arts Club, the Players club, the Brotherhood Synagogue, or Calvary-St. George's Church; or can splurge on a stay at the aggressively hip Gramercy Park Hotel, these coveted keys and the verdant two-acre jewel box they unlock are off limits to you, period. No exceptions are made."

So the "fortunate few" who have access to the "coveted keys and the verdant two-acre jewel box" have to "rationalize" the privatization of property that they, through a neighborhood association, own and pay to maintain.  The park is "off limits" to the rest of us, the "connection-challenged mortals."  So, what's up with the hostility to the exclusion of the public from private property?  Is this an urban mindset, where there is very little private greenspace but many public parks?  Am I unable to understand this attitude as a Midwesterner, where the opposite is true?

It does make me want to stay at the Gramercy Park Hotel so I can visit the park, however....

Listed below are links to weblogs that reference The Elusive Keys to Gramercy Park:

A friend lives on the park and I have been in it. The key is almost as much a barrier to enjoying the park as the lack of a key is. There's almost no spontaneous use of the park, and in fact it seems generally underutilized by those with access. This looks like one of those cases where continued privatization could be a net loss to society, since the necessary barrier to outsiders is a big barrier to insiders, too. Sure, ownership of a key enhances value to nearby properties, but that neglects the enormous increase in value that would be obtained by nearby but keyless neighbors, not to mention visitors and residents of the city at large, if this were turned into a managed commons. The rub, of course, is that a good deal of public law complicates the necessary management.