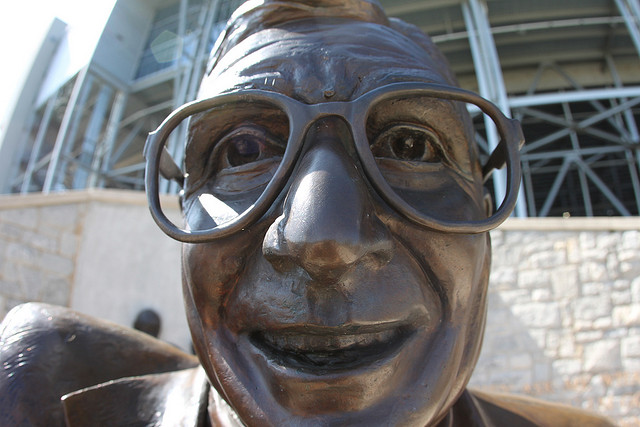 Over at the Faculty Lounge, Al Brophy has a very thoughtful meditation on the future of the Joe Paterno statue in State College.  Al writes, "There are a lot of factors one should consider in statue removal - like who had a say in the inital placement, what was known at the time of placement, what is known now,  and the meaning of the statue now.  A lot of those factors counsel in favor of removal, I suppose . . . .  But I continue to think that the monument should be left up; now it can serve as a reminder of what happened."  Al's sentiments are echoed in Ta-nehisi Coates' recent New York Times' column.  Coates makes the case that removing the statue amounts to erasing history.

Although Al's position carries some real theoretical punch, I want to argue that it would be a mistake to leave the Joe Paterno statue intact.

On the larger point, I don't fully agree with the proposition that removing monuments amounts to "rewriting history."  The fundamental difficulty with that position is that the landscape has never been a neutral record of the past.  The built environment has always worked as a normative discourse fashioned by powerful groups and used to express messages about who belongs and who does not. Thus, changing  the composition of a jurisdiction’s monuments does not erode any universal truth.  Here in Kentucky, for example, there's a statue of Jefferson Davis under the rotunda of the capitol building with the inscription "Patriot - Hero - Statesman."  Many Kentuckians remian committed to the proposition that removing the statue amounts to whitewashing Kentucky's history in the name of political correctness.  But that just isn't true as a factual matter.  Kentucky never seceded.  Thousands and thousands of its sons died in the defense of Union.  The statue isn't about history.  It's about sending a (government sanctioned) message that blacks aren't welcome.

On the specific issue of the Joe Paterno statue, I don't think that leaving the sculpture intact would serve as a particularly good reminder of the shameful events at Penn State.  The aesthetics of statue--it depicts a creepy-looking Paterno running onto a football field with his finger in the air--convey nothing about child abuse, shame, moral frailty, or abuse of power. Over time, the intact statue may do more to re-deify Paterno than address the problems so entrenched in the culture of Penn State.  Moreover, I don't think Sandusky's victims, many of whom still live in State College, should be forced to confront a corporeal rendering of the man who may have enabled his conduct.

The best course of action, I argue, would be to remove the statue and then hold some kind of memorial competition to find its replacement.  Done correctly, the destuction of the Paterno statue could initiate a process of critically rethinking what values the community holds and who deserves the honor of being remembered in steel and stone.  A community-wide deliberation about what should replace  Paterno  would do more to promote reflection and sophisticated thought than simply leaving the statue intact.

Listed below are links to weblogs that reference Remove the JoePa Statue:

Excellent thoughts. Part of the problem of all of this is that everything seems so overwrought at the moment, but I think you've got it exactly right that leaving things like this in place just allow Joe to remain the focus, ignoring Sandusky's victims. Tearing it down would send the message that Penn State is serious about doing everything it can to make right the past wrongs. What I'm really afraid of is that the statute will be torn down by some angry folks, and not officially. Then the school won't have a chance to make the right decision on its own, and it will just feel like vengeance.