The Death of a Town 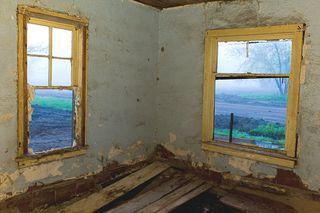 The New York Times has a fascinating article today about the abandonment of Treece, Kansas, a town built literally on top of zinc and lead mines and now thoroughly, completely, contaminated.  The mining companies that caused the contamination and abandoned the mines are, of course, out of business.  The town is a parade of horrors -- structures and parts of roads collapse into abandoned tunnels from time to time, the lead dust in the air has led to children with lead-blood levels three times the national average, and the bodies of water that aren't orange are filled with acid. “The only thing polluted in Treece,” says Rex Buchanan, interim director at the Kansas Geological Survey, “is the earth, air and water.”

A few blocks away, I saw an immaculate double-wide trailer on a flowery corner lot. Its owners — Della Busby, a shovel-jawed woman with short bangs like Bettie Page’s and a raspy smoker’s growl, and her husband, Tim — had refused the buyout. Treece’s official population was now just two people. “To be honest, I don’t know why everyone left,” Della told me when I found her on her porch later that morning, still in the pink pajama pants and Las Vegas T-shirt she’d slept in. “Despite the obvious, it’s kind of nice out here. I’ve got the place to myself.”

A fascinating, and depressing story.

Listed below are links to weblogs that reference The Death of a Town: