Super Bowl in Indianapolis: the Epicenter of Awesome 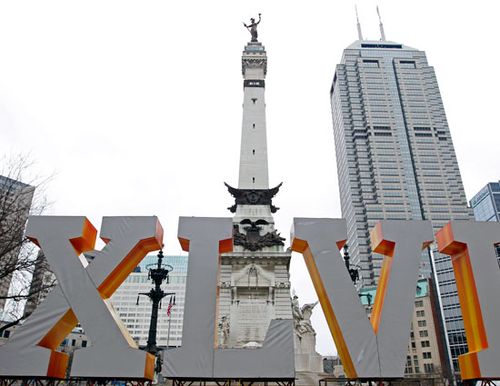 I am Super-bummed to miss out on the temporary but, by all accounts, awesome transformation of downtown Indianapolis in anticipation of the Super Bowl.  From the zip line down Capital Avenue to the ice wall from which beer is served on Georgia Street, the football festivities have taken over the city in a major way.  The economic impact of hosting the Super Bowl remains subject to controversy, but my empirical research (which consisted of reading the Indianapolis Star and reviewing my friends' Facebook posts), reveals a much more significant benefit of hosting the Super Bowl.  Sure, Indianapolis is a significant convention town and has hosted many major sporting events.  Every May, over 300,000 people attend the Indy 500, and the Final Four is regularly held in Indy.  But the Super Bowl is different.

I grew up in Indianapolis in the 1970s and 1980s.  The city had colorful nicknames at the time -- especially "Indian-no-place" and "Naptown."  Downtown closed at 5p.m.  But things began to change in the mid-1980s.  In 1984, we built the Hoosier Dome (I refuse to call it the RCA Dome) in the middle of downtown with fingers-crossed that a NFL team would choose to locate there.  A deal with struck with Robert Irsay, and the Colts arrived in the middle of the night, in a fleet of Mayflower trucks.  Making the transition from a basketball town to a football town took a few years, and probably required the particular magic of Peyton Manning, but the investment in the Dome and the Colts represented a leap of faith for the city.  By the time I came back to Indy after graduating from college in 1994, downtown was already in the midst of a transformation.  Circle Centre Mall opened in 1995 in the warehouse district.  The Indianapolis Zoo had moved downtown in 1988 -- it was joined in 1989 by the Eiteljorg Museum, in 1996 by Victory Field (the most beautiful minor league park in America), in 2000 by the NCAA Hall of Champion, and in 2002 by the Indiana State Museum.  The museums, Victory Field, and the Zoo are part of White River State Park, three blocks from the Indiana Statehouse.  Beyond downtown, Indianapolis has a thriving arts district, the best children's museum in the world, great neighborhoods, restaurants, and schools.

Indianapolis is the 12th largest community in America, but the traditional inferiority-complex is hard to shake.  To many, Indy has always felt like a big small town, not a big city.  So while the value of hosting the Super Bowl may be difficult to quantify, I would suggest that the greatest benefit is that it put a mirror up to Indy and allowed us to see and appreciate all of the wonderful changes that have taken place over the past thirty years.  Indianapolis isn't Naptown anymore.  We've arrived.  Enjoy the Super Bowl.

Listed below are links to weblogs that reference Super Bowl in Indianapolis: the Epicenter of Awesome:

Now we are a Super Bowl city. We spent hundreds of millions of dollars to build LOS so that the game would come here instead of spending that money on the community where it would do more good. Every time I take my family out to eat, I pay a 1% earmark tax to pay for that monstrosity. The Super Bowl or Lucas Oil Stadium do not make us better.

I work downtown, and every day I drive by block after block of abandoned houses. Indy was recently named the second emptiest city in America. Cities like San Antonio, which is roughly the same size as Indy, have a vibrancy Indy will never have because people live in the city. Here, we invest in the wrong things. We have a Disney downtown with a decaying city around it. Nordstrom's has left Circle Center. Borders is gone on Meridian and Washington. There are a lot of bars and hotels that cater to sports fans, but increasingly, the average Indy resident cannot afford to attend those games.

You have bragging rights. Enjoy it. I live here and none of this made this city any better than it used to be. In fact, I would argue that by chasing after that which absolutely does not matter, and by asking the poor and struggling of this city to pay for it, we have lessened ourselves. Take it for what it's worth.

Indianapolis is and was a great city to have the Super Bowl in. I like what was said in the article in that most from Indy see it as a small town but when the "mirror" was put in front of them, they could appreciate the city for what it is.