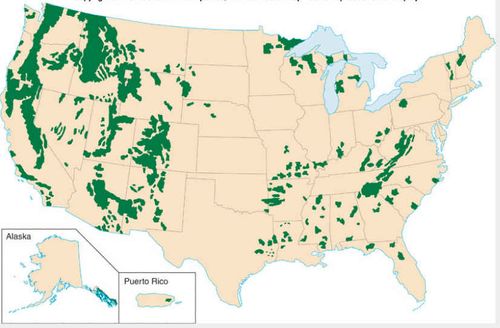 Scattered across the U.S., there are 155 national forests comprising 193 million acres of land (taken together, that's more area than the state of Texas).  Late last week, the Obama administration issued a new rule to better balance wildlife protection with logging, drilling and recreational uses.  The details of the rule appear rather complicated, but reports indicate there's a new emphasis on "sound science," the protection of water resources, and streamlining forest management. Taking a quick flip through the stories in the press, it appears that both loggers and environmentalists are unhappy with the new rule, which means it's probably a pretty good compromise.

Other fun facts about the national forests:

-- Alaska accounts for 12% of all national forest land.

-- 80% of national forest land is west of the Mississippi.