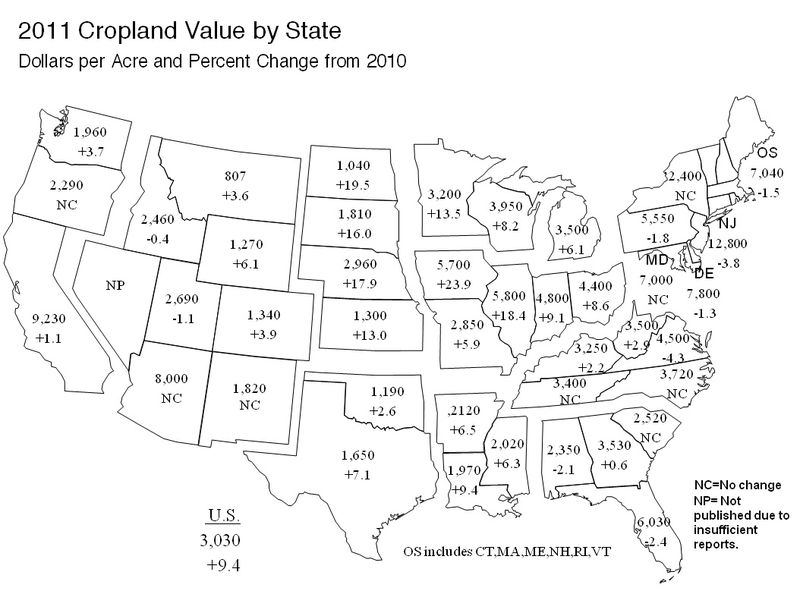 Steve posted last month about the rising prices of agricultural land in Iowa.  According to today's Wall Street Journal:

Nationwide, residential land values in the U.S. have fallen nearly 70% since peaking in the second quarter of 2006, according to a recent report by the Lincoln Institute of Land Policy, a Cambridge, Mass., think tank. Meanwhile, the value of U.S. cropland (excluding Alaska and Hawaii) rose close to 20% between 2007 and 2011, according to the U.S. Department of Agriculture.

The demand for farmland is being fueled by rising prices for everything from corn to cotton. Net farm income is forecast to climb 31% in 2011 to $103.6 billion, its highest level on an inflation-adjusted basis since 1973, according to the USDA.

The U.S. Department of Agriculture has a fascinating report on the increasing value of farms, crop land, and pasture land in the United States.  You can download the report here.  The map above is from the August 2011 USDA report.  Check out the numbers on the Dakotas and Nebraska.

Listed below are links to weblogs that reference Agricultural Land Prices Rising: