New York Should Have a Property Interest in High Line Parks 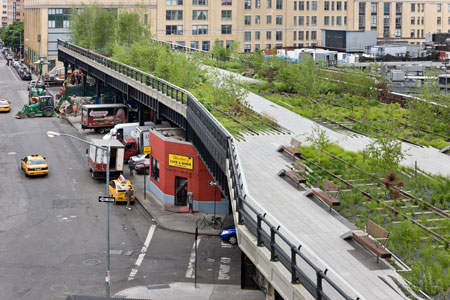 In 2009, New York opened High Line Park to rave reviews.  The city (and its allied private foundations) converted an unused stretch of elevated train tracks into a greenspace.  By all accounts the High Line as been a smashing success; it's spurred new investment throughout the old Meatpacking District.

In fact, the park has been so successful that now other cities such as Chicago, Philadelphia, Detroit, and St. Louis, are working to transform elevated train trestles into public spaces.

New Yorkers shoud be furious.  These copycats are pulling a fast one the taxpaying citizens of the Big Apple. Afterall, New York took a big risk putting up the High Line.  The 1-mile section cost over $150 million to renovate and, at the time, nobody had any idea if it would pay off.  If the park had bombed, New York would have had to pay the costs all on its own.  And now that the idea is successful the city cannot fully internalize the costs benefits of its risk-taking.  That's bad.

The solution, I think, is to grant cities intellectual property in their innovations. Just as patents promote risky but ultimately valuable scientific experimentation, granting some form of IP protection to cities and states could result in a socially beneficial upsurge in municipal experiments.

It's easy to complain that our local governments don't do enough and that politicians lack the courage to enact bold new ideas, but in practice they have very few incentives to try genuinely new things.  It's much easier to sit back and copy the ideas of others (I'm looking at you Chicago).  Some form of intellectual property rights could fix that.  Think this idea is too far out?  Well, someone has already written an Article explaining why I'm right.

Listed below are links to weblogs that reference New York Should Have a Property Interest in High Line Parks :

Not to endorse what seems like a profoundly bad idea to me, but I think you mean "internalize the benefits." Though I'm pretty sure it's in NYC's ultimate interests for other cities to be healthy and successful too.

Rebecca, thanks for the catch.

Brilliant ideas are not limited; NYC loses nothing by other cities adopting things pioneered in NYC.

But when I saw the headline, my thought was that you were headed in a very different direction: the notion that the NYC community ought to be sharing the benefits created by High Line Park, through collecting some portion of the increased land value in the surrounding area in the form of a tax on land values. This, of course, would require regular, thoughtful and high quality assessments of land value, block by block.

If that sounds difficult or expensive to you, I'd disagree. Valuing land well is not all that hard; NYC was doing it 105 years ago. (Search on "Lawson Purdy" for more information.) And consider what computer-assisted assessment can add, if the programming is properly done. What is more difficult (and expensive) is valuing the buildingsand their fixtures and contents well.

I'd also argue that we have no business assessing improvements to land at all, and every right -- even responsibility -- to assess land value and collect a significant share of it for public purposes, instead of letting it remain in the pockets of individuals, corporations and "non-profits" who did no more -- and no less -- to create it than do the tenants, tourists, dayworkers and others whose activity and presence make NYC the city it is.

If NYC put $150 million into HighLine, and it created, say, $300 million worth of increases in land value, why should the $300 million benefit go to the landholders? Wouldn't it be smarter to collect that value, month in and month out, and utilize it as the seed money for the next such project, and then in a few years be collecting more land rent from both projects and use THAT to fund our common spending.

Makes a lot more sense to me than taxing sales, and hotel rooms, and wages.

It dates back to the 1870s. No, it isn't Henry George; it came from a Tennessee businessman, writing to his governor.

Seems a bit churlish to me to consider asking someone in another city to pay royalties on an idea when the city doesn't ask its local landholders to pay for projects which enhance their land value.

"The solution, I think, is to grant cities intellectual property in their innovations."

Why would I care if another city builds a beautiful park? Your greed is disgusting.