A Non-Taking on the Jersey Shore

I spent the last week on the beach in Ocean City, New Jersey.  During our yearly pilgrimage to the outlet stores in Atlantic City, we stumbled on this oddity between the Trump Plaza and Caesers casinos: 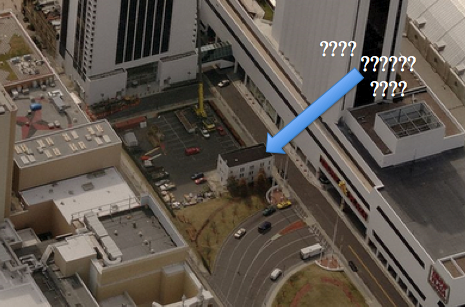 In case the picture isn't clear, there's a small house smack in-between two monsterous casinos on land that's zoned for gambling.  This doesn't exactly seem like the highest and best use.

After doing some digging on the internet, I found that this property was at the center of a major takings case in New Jersey.  Vera Coking and her husband bought the property in 1961, when Atlantic City was still a thriving beachtown. A decade later, as the city fell into decline, it made the drastic decision to legalize gambling and welcome big-time casino development.  The prime location of Coking's three-story house quickly attracted the interest of the real estate industry. In 1983, for example, Bob Guccione (the founder of Penthouse), offered to purchase the house for $1 million to build a casino. Coking said no.

Soon enough, the property attracted the attention of another tycoon - Donald Trump.  Unlike Guccione, Trump had the local redevelopment agency attempt to acquire the property through eminent domain for $250,000, a much reduced price.  Coking sued Trump and the redevelopment agency, claiming that the taking was not for a public purpose.  The Superior Court in New Jersey agreed with Coking.  It ruled that because there were few restrictions on what Trump could do with the property, there were "no assurances that the public interest will be protected." 727 A.2d 102, 111 (1998).  Of historical interest for property profs, this is the Institute for Justice's first test case for the theories it later advanced in Kelo.

Postscript:  Coking's house in now on the market.  You can own a piece of Property History for $5 million.

Listed below are links to weblogs that reference A Non-Taking on the Jersey Shore:

Vera Coking is my Aunt. I'm so glad that justice was served for her and off spring. Thank you for posting this video.