It's Alive! The Rule Against Perpetuities in the News 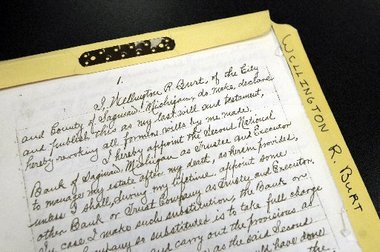 The Rule Against Perpetuities has come to Lexington, KY.  The RAP has finally ended a local girl's lengthy wait to get a share of a family fortune that's long been tied up in trust. Christina Alexander Cameron, the great-great-great-granddaughter of lumber baron Wellington R. Burt, is one of 12 heirs set to split Burt's $100 million estate -- 92 years after his death. Burt included a clause in his will that prevented his family from collecting any money until 21 years after the death of his youngest grandchild in existence when he died.

Other than the RAP angle, this story has a number of delicious twists and turns.  First, by all accounts, settling the estate has been an absolute nightmare.  The Probate Judge has noted that the case involved negotiations among 20 attorneys - the affair has become "one of the most complicated research projects" to blow through the legal community in Saginaw.  In addition to the many legal questions, the probate judge has been tasked completing some serious genealogical research.  Initially, 30 people claimed to be direct descendents of Burt. Public records, however, proved that only a dozen from that group are the fruit of Burt's family tree.

Second, the drama surrounding the estate appears to have torn the family apart and brought much havoc in the lives of Burt's descendants. According to one account, "Within a year of Burt’s death, some of his children attempted to break the trust in court, claiming the old man wasn’t in his right mind when dictating that last testament. Fighting the lumber baron’s trustees legally became a tradition for generations of Burts."  Cameron herself describes the money as something of a "curse" that's been a central obsession for generations of her family.

Finally, it seems like the trustee of Burt's fortune did a rather poor job managing the corpus.  When Burt died in 1917 his wealth was estimated at somewhere between $40 million to $90 million, and yet the trust is currently worth only $100 million.  If these estimates prove true, the trustee could find itself hit with a lawsuit for breaching the duty of prudence or care.

Listed below are links to weblogs that reference It's Alive! The Rule Against Perpetuities in the News:

I am a professionally certified handwriting analyst, and just want to state that Wellington R. Burt's signature on this will and testament confirms that the children of Wellington R. Burt were in essence, correct: As stated in the above article "Within a year of Burt’s death, some of his children attempted to break the trust in court, claiming the old man wasn’t in his right mind when dictating that last testament". His handwriting reveals Wellington to have been a frightfully angry man, prone to displays of violent rage, according to my analysis of his handwritten signature. Brutal with subordinates, he must've been a bitter opponent - and almost anything angered him. If one were to look at him the wrong way, he'd taken serious offense. Flying into a maniacal fit of anger was the norm. Perhaps his descendants can donate a small portion of his estate for anger management programs or other social services that help dysfunctional families in order to dispel the bad karma, if you will. Intelligence is certainly there, so he did know exactly what he was doing, but his will and testament was done while in a fit of utter rage. And, within the context of other letter formations, he was a brilliant strategist and therefore an excellent risk taker and leader. However, he held a deep resentment toward his own family of origin, which may explain why he so oddly cut his own children out of the estate. His handwriting shows that he himself was forced to grow up very early in life, and that perhaps he was forced into a situation whereby he had to support his own parents or guardians because they could not care for him. Wellington never let go of the severe sense of unfairness he experienced as a young lad, which shows here prominently in his consistent resentment strokes. He probably, therefore, resented others' gaining from his hard work when he himself was not afforded such a luxury. In sum, a Bill & Melinda Gates, an Oprah, or a Steve Jobs he was not! More like Dickens' Ebenezer Scrooge, in this handwriting expert's professional opinion.