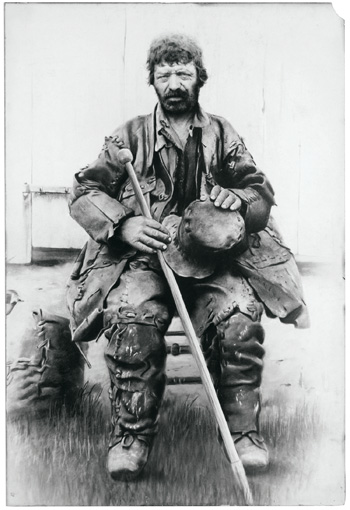 A fascinating story from Ossining, New York caught by eye this morning in the New York Times.  Local history buffs from New York and Connecticut (and fans of Pearl Jam) may already be aware that back in the 1860s-1880s, a man known only as “Leather Man”  walked a 365 mile circuit through at least 41 small towns on a 34-day cycle.  Apparently he was so compulsively prompt on this tour that you could set your calendar by him.  Leather Man was a source of fascination during his lifetime.  Apparently “thousands” of articles about him appeared in local newspapers
at the time, documenting his travels.  He never spoke, lived in lean-to’s or caves, and wore a 60-pound suit of clothing made from discarded boots (thus, his name).

Leather Man died in 1889 in one of his regular shelters near Ossining, New York.  He was buried in the pauper section of Sparta Cemetery at government expense, without a tombstone.  In 1953, a bronze plaque was added to the fieldstone marking his grave.  It identifies him as “Jules Bourglay,” a native of Lyon, France.  But researchers say that there is no more reason to believe this origin story than dozens of others.  Leather Man is a mystery.  His grave, situated along busy Route 9, is a stop on dozens of local tours.  The elderly and school children, along with curious individuals, visit his grave often.

[More after the jump]

When Leather Man was interred in Sparta Cemetery, it was owned by the First Presbyterian Church of Ossining.  In 1984, the cemetery was deeded to the Ossining Historical Society Museum, a New York not-for-profit corporation.  And here’s where the story gets interesting in the present day.  Two things about Leather Man’s internment bothered the Historical Society.

First, the pauper’s section of Sparta Cemetery is apparently treacherously close to the right-of-way for Route 9, a busy highway with no shoulder.  There was therefore a public safety concern about the location of such a popular grave.  The Historical Society desired to disinter Leather Man and reinter him in an empty grave closer to the center of Sparta Cemetery, in a location described in court filings as a “safer and more dignified setting.”  (The petition and order can be downloaded here.)

Second, there is significant curiosity about Leather Man.  Was he really French?  Was he autistic?  What did he look like?  Since the Historical Society desired to move his grave for safety reasons, it seemed like a good idea to take the opportunity to answer all of those lingering questions.  Therefore, the Historical Society petitioned the Supreme Court in the County of Westchester for permission to do the following:

“(1)  the removal of the remains of the Decedent from his present burial location in Sparta Cemetery for the purposes of improving the public health and safety;

(3) reburial of the remains at Sparta Cemetery in an appropriate location away from New York State Route 9.”

The Historical Society relied upon two New York statutes to give it the authority to (1) disinter and reinter Leather Man; and (2) obtain the biological material necessary for the testing described above.

First, the Historical Society, as owner of Sparta Cemetery, alleged to be the only party with standing to remove his remains pursuant to New York Not-for-Profit Corporations Law Section 1510.  Leather Man died anonymously in 1889 and was buried in a pauper’s grave.  Therefore, the potential identities of other categories of persons with standing (the burial plot owners, the surviving spouse of the decedent, the children of full age of the decedent, and the parents of the decedent) were fairly moot.

The Historical Society was granted permission by the Supreme Court of New York, County of Westchester, to exhume Leather Man and conduct the testing.  Said exhumation occurred last week and, much like Geraldo Rivera’s much-hyped opening of the Al Capone vault, found nothing other than coffin nails and dirt.  No biological material was found to be tested.

I find this story to be fascinating.  I have blogged previously about my interest in “Written in Bone: Forensics Files of the 17th Century Chesapeake,”  the Smithsonian’s CSI-type exhibit about the deceased residents of Jamestown, Virginia, and wondered about the legal authority to disinter non-Native American human remains, conduct testing, and place them in a museum.  I haven’t been able to find a developed body of law on this subject, and I think that the Historical Society’s court filings demonstrate that gap.  My preliminary read is that the Historical Society was successful in court because (1) they controlled the remains which were buried in a pauper’s grave in a cemetery they owned; and (2) no living descendants or others with legal standing came forward to protest.  To the latter point, none of the statutes relied upon by the Historical Society would have given any legal standing to descendants other than surviving spouse, parents, and children.  For a person who died in 1889, no living descendants would appear to have standing in New York.  I find it exceedingly clever (if disingenuous) that the Historical Society used the anatomical gift law as its legal basis for using biological material to satisfy historical curiosity.  I’m a totally geeked-out history buff but, seriously, how does finding out whether Leather Man was autistic, or French, improve the human condition?  If I own the cemetery in which they are buried, can I dig up anyone I’d like to satisfy whatever curiosity I may have about them?  To be fair, the Historical Society and cooperating scientists stressed that Leather Man’s remains would be treated with respect and dignity.  I have absolutely no reason to doubt that.  But this story raises a question that continues to fascinate me.  How do we, as a society and a system of laws, reconcile the “rights” of the dead with the needs and desires of the living?

Listed below are links to weblogs that reference Disinterring Leather Man:

Great post, Tanya. My personal preference is to let the dead rest in peace. I'm guessing a lot of other people feel that way as well. Still, there have been a surprising (to my mind) number of requests for reburial in recent years (and in the nineteenth century, too, when reburials were part of creating a new history).

Two questions: Isn't the historical society's petition a sign that even those who own the land where a body is buried have limited rights of removal. Also, why is it that descendants of a person who died in 1889 have no standing in New York? Is there a statute that I don't know about that cuts off claims that stretch back that far? I thought that the right of descendants to access private property where an ancestor was buried create an easement in gross, which seems to descend to remote descendants. I would have thought this more important right -- of having a say in what happens to a body -- would be similar.

Thanks Tanya, for bringing this to light here. As a private citizen, I also became fascinated with the implications for future cases.
I have a close relative who was adopted, and subsequently orphaned as a child in New York City. He has tried for over 30 years to find out who he is, but has been repeatedly told a "100 year law" prevents him from accessing any personal information about his birth. He is alive, and has descendents who want to find out who he is, but cannot. Yet total strangers were allowed to exhume the Leather Man out of historical curiousity because they could! At one point, I hypothetically suggested that he come forward to claim he was related to the Leatherman, and opposed the exhumation, because no one could prove he wasn't a relative. He is also quite a quirky individual, but I have a feeling that wouldn't have stood up in court :)

The Leather Man's story just continues to lead to some fascinating debate.

Don, thank you for posting a link to your website. I apologize, I should have done so in my blog post. Your site is a great resource about this case!

Al, as to your first question, yes. In my research on my cemeteries article, I have found an incredible diversity of state statutes addressing the subject of removal and reburial. The common features of most state statutes is that the owner of the cemetery has a right to consent (at least to the reburial in the same cemetery) but that the family has the most significant right to consent. As to your second question, there is also significant diversity about who constitutes family.

The New York statute relied upon by the Historical Society in its petition (New York Not-for-Profit Corporations Law Section 1510) reads, in relevant part:

"(e) Removals. A body interred in a lot in a cemetery owned or operated by a corporation incorporated by or under a general or special law may be removed therefrom, with the consent of the corporation, and the written consent of the owners of the lot, and of the surviving wife, husband, children, if of full age, and parents of the deceased. If the consent of any such person or of the corporation can not be obtained, permission by the county court of the county, or by the supreme court in the district, where the cemetery is situated, shall be sufficient. Notice of application for such permission must be given, at least eight days prior thereto, personally, or, at least sixteen days prior thereto, by mail, to the corporation or to the persons not consenting, and to every other person or corporation on whom service of notice may be required by the court."

So under the New York statute, only immediate family members (surviving spouse, parents, and adult children) have the right to consent to removal. If their consent "can not be obtained" (since they're dead), presumably anyone can petition to the court for removal. Now, if there is a lot owner, and that lot owner is a descendant, then they would have a consent right under this statute by virtue of owning the lot, not because they are a descendant. In this case, Leather Man was buried in a pauper's grave, so there was no private lot owner.

Your observation about the conflict with the (common law?) easement to visit the grave of an ancestor is a very interesting one. I suspect that given the lack of attention to the development of the law in this area, we would find a lot of inconsistencies if we compared statutory and common law rights.