Back in the former CSSR

I'm back in the Czech Republic, teaching comparative property rights to American law students at Charles University in Prague.

On the way here I had the opportunity to stroll through the Old Town area of Warsaw (strategic layovers are my plan to see the world).  Warsaw was essentially completely destroyed between 1943 and 1945, particularly following the Home Army uprising of 1944 against Nazi rule.  Thus the Old Town I strolled through was, in many ways, not so old: it looked old, but that's because the buildings had been rebuilt to look exactly as they were.  The same is true of many old sections of Berlin.

Knowing that left me with a lingering and disturbing sense that it wasn't "real," but I'm not sure I can justify that feeling.  After all, if each building had, at different times, been rebuilt because it was becoming dilapidated, I certainly wouldn't think the area wasn't "real."  The White House was rebuilt after an invading army burned it to the ground, but no one I know walks through it thinking it's just a replica.  People live and work in those buildings.  So why couldn't I shake the feeling that it was a trip through the architectural equivalent of Madame Tussaud's?

It strikes me that in ways that are difficult to describe, some buildings, and some places, seem to have properties we associate with a living being.  Perhaps the lives they were imbued with became part of them.  Perhaps they have, some how, independent lives of their own.  Perhaps it has something to do with the violence with which they were destroyed.  But whatever the reason, at a gut level, walking through Warsaw, I had an eerie, 'invasion of the body-snatchers' sense that the beautiful buildings around me were -- in both a literal and figurative sense -- a facade.

As my poor attempts a photography below show, the beauty of the place isn't diminished at all by the buildings having been rebuilt.  Only my sense of ease was, and only because there is something unique and mysterious about property, that is beyond my attempts to define it, that gives it a sense of life. 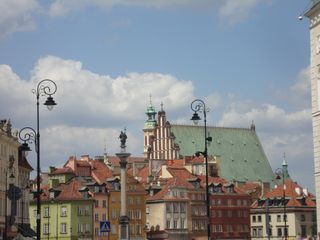 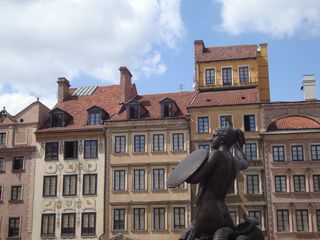 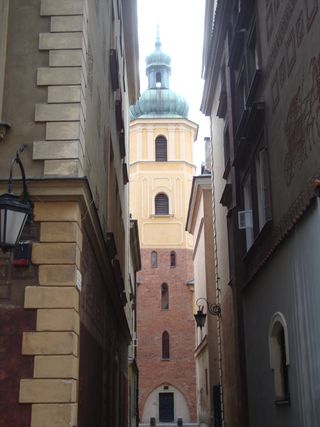 (Comments are held for approval, so there will be some delay in posting)

Listed below are links to weblogs that reference Back in the former CSSR: