Who Owns the West?

For those of you that don't follow Glenn Beck, you may have missed this address on federally owned property.  Although Beck's outburst is filled with a few a million nutty conspiracy theories, I think he's asking a pretty important question: Why is so much land in the West owned by the federal government?  Check out the following maps - the first shows all federally owned land (including Indian reservations) and the second shows federal land as a percentage of total state land area: 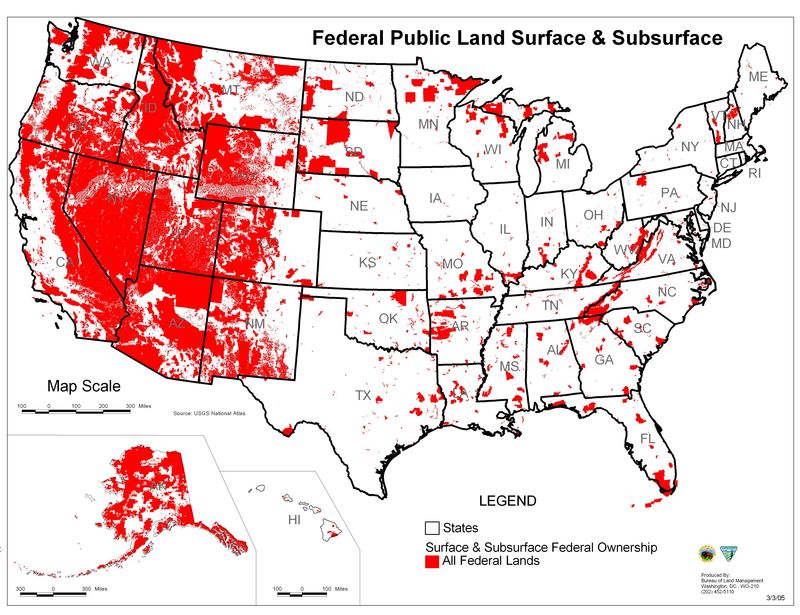 If we really believe in the power of private ownership to incentivize useful activity, why isn't there more of a push to auction off some (a lot?) of this land?  Currently, driving across much of the West is like driving across the moon - it's wasted, desolate space.  Why not turn that over to private entrepreneurs? Maybe we'd get fewer moon craters and more Las Vegases.

Listed below are links to weblogs that reference Who Owns the West?:

The West may be dry and empty, but it's not wasted. Federal land is mined, grazed, logged, and used for recreation. People come from all over the country and the world to enjoy the western public lands.

Federal lands were closed to homesteading in 1976 (1986 in Alaksa). But, the federal government is still selling land. In fact, a lot of the newer suburbs of Las Vegas were BLM land.

I think there is some great conversation around this question that has been looming for quite some time now.

Historically the West has more lands available for government purchase because these lands were not already owned by private entities such as in the East, so this should come to no surprise

I am not sure if I am an advocate for total "captilization" of Federal lands as this could potentially affect the natural habitats and parks the Federal government is working so diligently to preserve. I would propose possibly a private-public land ownership for these lands. That way both entities can help pay for the cost of renovation and preservation for mining, experiments, recreation, grazing (al la Brian Sawers) and can reap the financial benefits from tourism. In the end everyone could get a junk of the pie.

What do you all think?

If it is true that Federal lands would be better managed by private owners, I submit that the same is true for other Federal assets (like cash). I shudder to think what the guv-mint would do with the funds generated by a sale of Federal land. Federal land is like an asset locked up in a spendthrift trust. It can't be managed or sold for maximum income-production, but at least the principal is out of the hands of the feeble-minded and untrustworthy. Too bad we can't do the same for our tax dollars.

Yikes, I sound like a conspiracy theorist too. Actually, I'm just disgusted by politics. I'm about to begin my "why private property is good" unit in class, believe it or not.

There have been many proposals over history to privatize the public lands. They have all failed, in part because many important constituencies in the West don't want the lands privatized or turned over to state ownership. Those interests like the free access to the land (for recreation), the subsidies for exploitation (for mining or timber), or because if the states owned the land, they would lose money from it (as opposed to the feds who lose money right now) and they don't want the burden. There's a strong cultural element in the West that values having public land that is "open" for people to do what they want (hike, ORV, pan for gold, hunt) without anyone telling them what to do or to get permission (although this is changing with greater environmental regulations).

Finally, many people in the West (including many biologists) would strongly disagree with your statement that the public lands are "wasted, desolate space." There's tremendous environmental value in many of those lands, even (especially!) the deserts.

Personally, I think privatizing these lands would be a terrible mistake (including for the reasons that Paula indicates -- that the government is more likely to squander the money from selling the lands than squander the lands themselves).

Finally, many people out here don't really want another Las Vegas. One is enough.

I have always argued that one way to pay down the national debt is to sell federal land and apply the proceeds to the debt. I don't know if anyone has put a value on federal real estate holdings, but it would not surprise me to learn that the value exceeds the national debt by a healthy margin. And it is gravy that the land ends up in the hands of private landowners who will put the land to productive use. I am not saying to sell off National Parks, just non-essential federal land.

Given the market-value of the land that everyone would agree is "non-essential" (i.e., some salt pans in Nevada), I doubt we would cover more than a fraction of the national debt.

And what do you mean by "productive use"? More subdivisions around Vegas? That's been the primary outcome of the significant disposal programs that have already been underway -- contributing to the real estate bust in Southern Nevada.