In Time for Easter: The Tragedy of the Bunnies 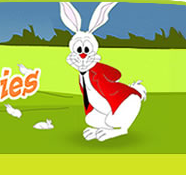 In my property class, we spend a couple of hours wrestling with the "Tragedy of the Commons."  In a typical year, I have my students read an excerpt from Hardin's seminal article, we go over the explanation in the Dukeminier textbook, and I pepper them with examples.  Although these standard approaches all work OK, I've found that the best way to demonstrate the concept is with a simple video game designed for high-schoolers.

The game, called the Tragedy of the Bunnies, vividly illustrates how "The Tragedy" plays out and why private property rights can help.  The concept is simple; You're a bunny merchant and you make your living by selling bunnies to children.  Your goal is to sell an many bunnies as possible in two rounds.  In both rounds, you score points by selling the bunnies, which you do by clicking on them.

The catch is that between rounds the bunnies get frisky and their population multiplies.  If you sell them all in the first round then you'll have lots of money, but no bunnies to breed and sell in the second round.  As this is the tragedy of the commons, you're also competing against two other bunny merchants controlled by the computer.

I usually invite a student down to the front of the class to play both versions.  They can then explain to the class why they overused the bunnies in the first game ("Because everyone else was grabbing bunnies, I had to as well!") and how private property then saved the day.  I think it works pretty darn well.  Although the game is simple (and clearly designed to promote private property) but it's a good springboard to discussing when and why the Tragedy plays out.  Click on "Play the game" to see for yourself.

Listed below are links to weblogs that reference In Time for Easter: The Tragedy of the Bunnies:

Thanks for this post. The "tragedy of the bunnies" game really seems like an effective teaching tool to explain the pros and cons of understanding private and public property. Who knew a high school game would be one of the best teaching strategies?

It's difficult to properly contextualize Hardin for 1L students. Hardin's motivation was population control, not property law. Short excerpts may exclude this, for example:

"In a welfare state, how shall we deal with the family, the religion, the race, or the class (or indeed any distinguishable and cohesive group) that adopts overbreeding as a policy to secure its own aggrandizement?" (p. 1246)

Perhaps more importantly, unless an equal amount of time is devoted to Ostrom, for example, students will be left with the impression that Hardin was right.

Why not present H. Scott Gordon, The Economics of a Common Property Resource: The Fishery, 62 J. Pol. Econ. 124 (1954)? The article predates Hardin and fisheries overuse has been empirically validated.