The Packers, Property and Community: Updated

I agree whole-heartedly with Steve's great post, but when we're talking about football, property and community, we have to talk about the beloved Packers.  The Packers are the only NFL team actually -- not metaphorically -- owned by the community.  When you see the crowd at Lambeau, you're looking at the owners.  Here's a shot of the Packers' ownership group getting the stadium cleared of snow: 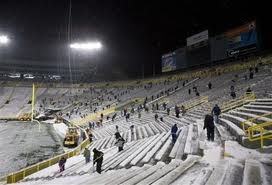 Green Bay, a city with a population that could actually easily fit within Cowboys Stadium, is by far the smallest community that has an NFL team, and they've still got it for only one reason -- 120,000 shareholders who live and work and grow old and drop dead in Green Bay.

Just imagine if the NFL could go back to the Packers model -- no more Baltimore Colts disappearing in the middle of the night, no more Raiders abandoning Oakland for L.A. and then abandoning L.A. for Oakland.  It is appropriate, as Steve suggests, that a community's conception of itself rooted in a team be protected by a property right.  In one place, it is.

Much respect to the Steelers, the Rooneys, Jack Ham, Jack Lambert, Andy Russell, Mean Joe, Rocky Bleier, the ghost of Mike Webster, hell even Roy Gerela.  I love the Steelers.  I love their brand of football and their tradition.  Other than the Packers, I doubt any community is as deeply invested in its football team as Pittsburgh is in the Steelers.  If the Packers lose on Sunday, the fact that the Steelers will have won will take a lot of the sting out of it.

But as I discovered during my 14 year sojourn in Wisconsin, once you get to know the Packers tradition, it's almost impossible not to love them.

No offense, Steve! (but a great defense)

A Packer's fan celebrating at Lambeau today makes the point: 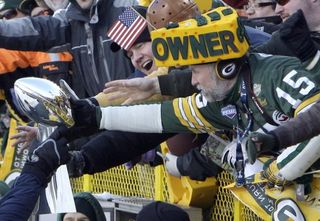 Congrats to the Steelers on yet another great season, and thanks to Steve for being a great sport.  And what a beautiful family!

Listed below are links to weblogs that reference The Packers, Property and Community: Updated:

If you are keeping score, according to official record books (or at least Wikipedia, which is just as good?) PACKERS have 13 NFL championships while the Steelers only have 6!!

True, Kurt -- but to give the Steelers their due, I'm darn glad that game wasn't 5 quarters long. I don't know about you, but I suffered during that second half.