You could construct a whole course out of this map, published by the Minneapolis Council of Social Agencies in 1937 and more recently re-appearing in this book.  Hat tip to Professor Diane Dube of the Mitchell Community Development Clinic for pointing it out to me.  I could stare at it, slack-jawed, for hours.

Some interesting things to consider:

I am fairly certain the map was intended to be merely descriptive, not prescriptive.  Nonetheless, it's fascinating. 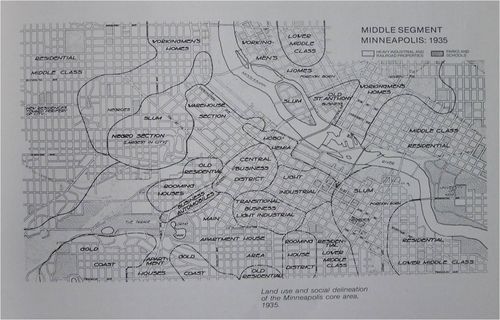 UPDATE:  Here is the 'Chicago School' map referenced by Kenneth Stahl in his comment in the comments section below.  Please read his comment for lots of great information about these maps, and about an interesting article he is working on: 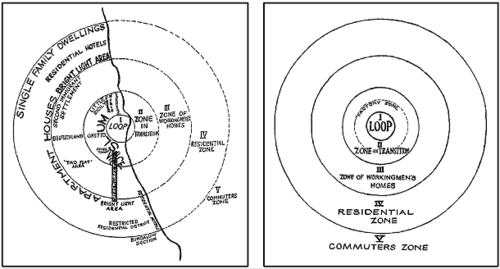 Listed below are links to weblogs that reference Teaching Zoning Soon?:

Mark, that is fascinating. Where did you find it?

Hey Tanya -- I edited the post with some more information on it. It was brought to my attention by the director of our community development clinic, and was published originally in 1937 by a Minnesota state agency.

Very cool. Would be interesting to see the prescriptive zoning map layered on top of this.

How does this map compare with the neighborhood maps used by HOLC/FHA during this time period? Was that the impetus for this or was is designed for a study for zoning changes?

I got this wonderfully informative e-mail from Professor Kenneth Stahl at Chapman, who has some very interesting thoughts on the map. He included an example of a Chicago school map, but I haven't been able to post it yet. I'll keep trying. In the meantime, here is some great information:

I wanted to leave this as a comment to your post but I was not able to attach a graphic that I thought you would find useful. Please feel free to re-post this e-mail if you like. I am not familiar with the particular map you posted but it was almost certainly inspired by the work of the Chicago school of urban sociology, and their famous graph printed in the 1926 Park & Burgess classic, "The City."

As for your query whether this map was “descriptive” or “prescriptive,” and the related comment from Kurt about whether HOLC/FHA maps were coextensive with these maps, I am actually working on a paper that addresses this direct question. The Chicago school’s maps were intended to be purely descriptive, and I assume the same for the Minneapolis maps. In fact, the Chicago school sociologists were in some sense social Darwinists, and were highly skeptical of Progressive-era reforms. Nevertheless, the Chicago school’s views were reflected in numerous ways in land use innovations of the period, including zoning, urban renewal, and yes, the HOLC/FHA redlining policy. In fact, Chicago school intellectuals wrote the FHA underwriting manual. I do not know, but hope to find out, how closely these “descriptive” sociological maps correspond to the redlining maps. One thing we do know, as Jane Jacobs tells us, is that the redlining maps and the slum clearance maps were one and the same, and that the former were therefore “accurate prophecies because they are self-fulfilling prophecies.”

I also have a little more information about the Minneapolis map. According to Larry Hisock, director and lead organizer of one of the Minneapolis neighborhood associations, it was used in 1938 as a sort of citizen's guide to Minneapolis, and distributed through the public schools.

It was entered into evidence as part of the Hollman Consent Decree, Minneapolis's watershed desegregation effort in the early 1990s.