On Property, Community, and the Steelers

The great Liverpool coach Bill Shakly once remarked, "Some people believe football is a matter of life and death. I am very disappointed with that attitude. I can assure you it is much, much more important than that."

I have no problem admitting that I feel this way about The Pittsburgh Steelers.  I care about them deeply.  Maybe too much.  At times, I've let the team get too enmeshed with the contours of my emotional life.  The Santonio Holmes catch to win the Super Bowl in 2009 easily ranks as the best, most emotionally raw moment of my life.  I know, I know.  It sounds awfully pathetic - but what's better than a last minute victory in a Championship game? Childbirth, as Nick Hornby has written, is extraordinary and moving, but it lacks that critical element of surprise.  Promotions and awards are nice, but they lack the last-minute time factor and suddenness.  And, of course, they certainlly don't have the wonderful communal aspect of sports.  So please, don't look down on those of us who love the game too much.

With all that in mind, and in honor of Super Bowl weekend, I wanted to link to a neat article that fleshes out some of these points.  Avital Margalit's Article, You’ll Never Walk Alone: On Property, Community, and Football Fans, argues that the law should recognize that fans have a property interest in the teams they follow.  I think this idea has some merit.  In Pittsburgh at least, the football team is deeply entangled with the community's conception of itself.  It's easy to romanticize this and let the whole thing get out of hand, but it doesn't seem all that inappropriate to protect such devotion with some property rule.  As Margalit writes, "fans belong to the club and to their community, and the club, al least in part, belongs to them." 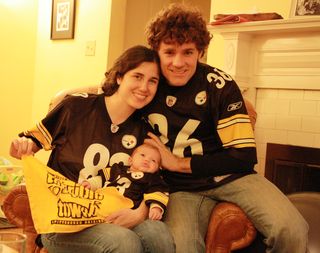 Listed below are links to weblogs that reference On Property, Community, and the Steelers: