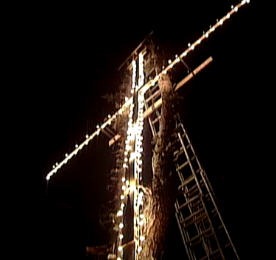 Carl Behr, a landowner in suburban Pittsburgh, has refused to remove a 24-foot illuminated cross from his property, despite warnings from government officials that the structure violates a number of local ordinances.  Behr claims the cross is "about the Lord" and that those who want it removed stand against God.  Behr's neighbors aren't' so sure.  As Fox News reports, "Lisa Fera, who lives across the street from Behr, has said the cross shines directly into her home and was built after she complained about Behr parking vehicles from his construction business  in front of her residence."  Fera says, "I feel that this is a direct intimidation of me, that each time you call the police or do something, a cross goes up." Someone may want to tell Behr that Jesus said he was the light and the way, not that you need to light up the way...

Listed below are links to weblogs that reference A Spite Cross?: