Foreclosures and the Failure of the American Land Title Recording System

I have just posted an essay to SSRN entitled "Foreclosures and the Failure of the American Land Title Recording System."  In it, I argue for the federalization of the land title recording system.  Here is my abstract:

In this essay, Marsh argues that the current foreclosure crisis should serve as a wake-up call for a long-overdue modernization of the American land title recording system.  Lenders invented the Mortgage Electronic Registration System (MERS) because the land title system, developed in a far different time and place, failed to meet the needs of the modern real estate industry.  But a private MERS-like system is not the answer.  Instead, Marsh argues that the federal government should implement a solution that replaces both the existing local land title system and MERS.

An ideal system should be organized around some clear principles.  It should be transparent.  It should be easy to search, through dynamic, robust indexing, and easy to access, preferably through the Internet.  Documents in PDF form should be downloadable.  Electronic filing should be facilitated.  There should be uniformity and consistency in the rules governing the form and substance of documents eligible for recording.  The system should be public.  Establishing and protecting a clear registry of property interests is and should continue to be an essential function of government.

Any feedback would be greatly appreciated!

If you are covering the Right to Publicity this week, as I am, you might want to check out a story that originally aired on 60 Minutes in 2009 and was updated last night.  It is available on the show's website here.

Yesterday the Massachusetts Supreme Judicial Court voided two foreclosures carried out by  U.S. Bancorp and Wells Fargo in 2007.  Both banks were acting as trustees for securitized pools of mortgage loans that allegedly included the borrowers' mortgage loans.  However, neither bank had been assigned the mortgages, and thus had no right to foreclose on the properties.

There are many, many thousands of potential cases out there that are identical on the pertinent facts to these two.  Unlawful foreclosures have been so rampant in the past few years that the next stage of this ongoing mortgage crisis may well be a huge wave of restitutions of unlawfully foreclosed properties to borrowers.  Despite what many banks have suggested, undoing unlawful foreclosures is not simply a question of retroactively crossing t's and dotting i's; it is a question of undoing the unlawful dispossession of private property rights of huge numbers of people.  No amount of going back and filling in the holes in paper trails can cure it.  Restitution will be necessary, and it will require overcoming enormous practical problems.

As the lawyer for one of the restituted homeowners said, this case was "merely the first petal off the rose."

A story (with an impressive "now and then" graphic) about the fate of a Civil War era building in New York.  In short:

A building owner has ignored the city’s demands to dismantle a fifth story that was added to a landmark mid-19th-century row house in Chelsea that may be the only surviving documented Manhattan station on the Underground Railroad.

The owner, listed by the city as Tony Mamounas, had been ordered by the New York City Building Department to remove the addition by last month, but neighbors say that work instead has been proceeding on the property, once home to Abigail Hopper Gibbons and her husband, James, who were prominent New York City abolitionists.

Over at the Faculty Lounge Al Brophy is dropping the knowledge on his new textbook, Integrating Spaces: Property Law and Race.  In his first post, Brophy explains the authors' goals: "We wanted to have some new cases that teach contemporary property doctrines in creative ways; cases that illustrate the centrality of race in contemporary property and in the development of property doctrine; and cases that integrate racial minorities into the first year curriculum as litigants even when race at issue.  Our hope was that faculty and students would turn to the book as a supplement to the first year property casebook."

In a follow-up post, Brophy discusses The Antelope, a case he feels should either replace or compliment Johnson v. M'Intosh at the beginning of property textbooks.

For those interested in this resource, the first chapter of Integrating Spaces is available on Aspen's website.

Property in the Pop Culture

With the turning of the year, I'll nominate the Arcade Fire's Sprawl II (Mountains Beyond Mountains) as the best property-themed song of the 2010.  Some key lyrics:

Cause on the surface the city lights shine,
They're calling at me, "come and find your kind."
Sometimes I wonder if the world's so small,
That we can never get away from the sprawl,
Living in the sprawl, Dead shopping malls rise like mountains beyond mountains,
And there's no end in sight,
I need the darkness someone please cut the lights. 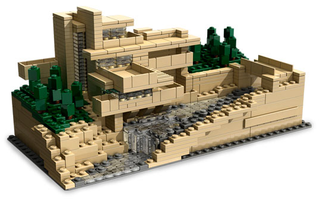 Also, the property-themed video game is probably My Town 2.  In case you're not familiar with "MyTown," "the game keeps tabs on your location using your phone's GPS, and lets you "check-in" to nearby businesses to gain experience points and game currency. This cash can be used to "buy" the businesses around you which in turn generate more cash in the form of rent."  It's something like a real-life game of Monopoly.

Finally, I'll point out the cool (but way overpriced) Architecture series from LEGO.  You can make your very own replica of Fallingwater, the Guggenheim Museum, or the Empire State Building.

All in all, a good year for Property.

Tarlock on Land Use Regulation and Environmental Protection

B of A settles with Fannie and Freddie

Bank of America announced today that it has settled its outstanding dispute with Fannie Mae and Freddie Mac stemming from sales of faulty subprime mortgages by Countrywide to the two GSEs.  Bank of America acquired Countrywide, and therefore the liability associated with the bad loans, in 2008.  Fannie and Freddie have pursued several large banks on the theory that the loans breached representations and warranties made to the GSEs regarding borrowers' incomes, the value of the underlying real estate, and other incomplete and/or misleading data.  Here is a summary of the deal, courtesy of Bloomberg:

Bank of America paid a premium, $1.28 billion, to Freddie Mac to resolve $1 billion in claims currently outstanding because the deal also covers potential future claims on $127 billion in loans sold by Countrywide through 2008, the Charlotte, North Carolina-based lender said in a presentation on its website. The bank paid $1.52 billion to Fannie Mae to resolve disputes on $3.1 billion in loans that were currently outstanding, or about 49 cents on the dollar. Bank of America’s total loss on the loans after recovering collateral and other assets is about 27 percent, said Jerry Dubrowski, a spokesman.

Bank of America is still liable for $2.1 billion in repurchase requests from Fannie Mae as well as any future demands. The agreement also didn’t cover $600 million in buyback demands from Freddie Mac as well as loans covered by the deal that turn out to be fraudulent or violated fair lending laws, said Michael Cosgrove, a spokesman for Freddie Mac.

News of the settlement sent B of A shares up 6.4% today.  I can see why, if the bank was able to dispatch $127 billion in future claims for the bargain price of $1.28 billion, although the caveat from the Freddie Mac spokesman regarding fradulent loans is interesting.  I'm not up to speed on the specifics of the GSEs' claims, but this seems like a curious settlement for Freddie in particular to accept.  The Bloomberg article, which can be found here, proposes that this agreement will serve as a template for the resolution of other Fannie and Freddie claims against subprime mortgage originators.

In honor of the beginning of the month, here are the most downloaded property articles over the last 60 days:

3. [119 downloads] No Protectable Property Interest in Making Land Use Decisions and Other Ethics in Land Use Issues 2009-2010  by Patricia Salkin (Albany)

4. [114 downloads] Toward an Economic Theory of Property in Information by Henry E. Smith (Harvard)

5. [103 downloads] Ostrom and the Lawyers: The Impact of Governing the Commons on the American Legal Academy  by Carol M. Rose (Arizona)

6. [91 downloads] Strategic Default: The Popularization of a Debate Among Contract Scholars  by Meredith R. Miller (Touro)

8. [66 downloads] The Complexities of Judicial Takings  by Benjamin Barros (Widener)

10. [60 downloads] The Social-Obligation Norm of Property: Duguit, Hayem, and Others  by M. C. Mirow (Florida International)

Not the most cheerful way to ring in the new year, but the Guardian just published a series of provocative photographs of decaying cultural landmarks in Detroit.  A bitter reminder that Detroit's problems started long before the current economic troubles.  You can find the photos here.