Should We Care About Detroit? 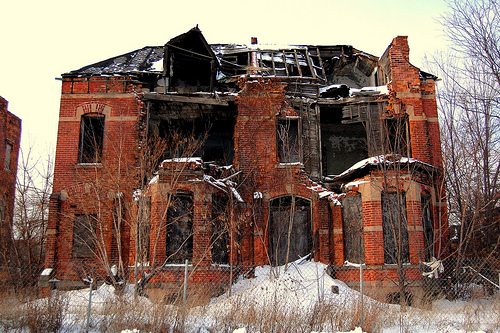 Detroit is sick:  Unemployment has swept through the town like a grass fire.  The automobile industry continues to spiral toward collapse.  Buildings lay abandoned. Housing prices have crumpled - the median price of a home sold in Detroit in December was $7,500 (not $75,000, but $7,500). And, most worrisome, residents are leaving the city at an alarming rate.  Demographers report that Detroit has lost 50% of its population in the last half-century (the 1950 census counted 1,849,568 Detroiters. In 2000 Detroit’s population was 951,270 and still decreasing).  Should we care?

To clarify, I’m not asking whether we should ignore the people of the Motor City.  I think most folks agree that we should work to eliminate as much human misery as possible.  Rather, I want to question whether we should be concerned about Detroit as a place?   Should the federal or state government pour emergency funds into Southeastern Michigan in an attempt to save the particular history and culture of the once proud city?  If we allow Detroit to crumble will we have lost something important?

A recent article from the New York Times about the fall and eventual re-birth of Pittsburgh suggests that there might be some long-term advantages to letting Detroit take its lumps.  The Times chronicles (rather briefly) how Pittsburgh reinvented itself after the collapse of its industrial base.  The declining population of Western Pennsylvania kept housing prices low and forced the local government to find creative ways of attracting new, more sustainable (and environmentally friendly) industries.

Pittsburgh is, by many accounts, a more pleasant place than it was during its industrial heyday.  Does it matter that the culture of the steelworker and the resulting sense of place has been lost?

Listed below are links to weblogs that reference Should We Care About Detroit?:

Shh...if someone in Washington hears you, they might suggest a taxpayer bailout of Detroit.

It's up to the state of Michigan and city of Detroit to fix Detroit's woes. If they succeed, fine. If they don't, fine. But one must be careful not to draw too many parallels between Pittsburgh and Detroit. Pittsburgh never had the heinous crime problems that dogged and still dog Detroit. History shows that simply flinging money at a problem (take public education for instance)rarely works. The entire state of Michigan has been particularly afflicted in recent years by economic woes, ones that predate the financial meltdown begun last Fall.

By the way, if you're really interested in highlighting urban decay, Cleveland's troubles predate those of Detroit by quite a bit.