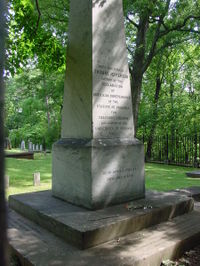 This ranks right up there with "Who's Buried in Grants Tomb?"  In light of the controversy over access to Jefferson's grave, which I've been following and gotten involved in a little bit, I now have a question
that's worthy of a final examination in wills.  First, some background on this.

And it also turns on a reservation of the graveyard way back in the 1830s when Monticello was sold out  by Jefferson's family.  So let's look a little more deeply at this puzzle.  Apparently the last recorded reference to the cemetery in a deed was when Monticello was sold in the 1830s.  At that point, the family of Thomas Jefferson Randolph reserved the cemetery:  "The parties reserve to themselves the family graveyard with free access to the same."  Nice!  This is an explicit reservation of what is an implied right of access in Virginia and a bunch of other states, too.  There is also an explicit reservation of the title to the cemetery.


It was under this last clause that the graveyard became the property of Thomas Jefferson Randolph when his mother died on October 10, 1836. ...

Thomas Jefferson Randolph died October 8, 1875, and was buried in the little plot laid out a hundred and two years before, and where there now existed nearly fifty graves. In his will, dated January 24, 1875, he made a number of specific bequests of silver, portraits, and certain items which had belonged to Mr. Jefferson, and then he provided carefully and explicitly for his unmarried and widowed daughters in his bequest to them of Edgehill and of its adjoining lands. However, he made no mention of the Monticello graveyard, which he had inherited from his mother. Thus it became the undivided property of all heirs, and so it remains. This divided ownership contributed in part to the difficulties faced by the family within a few years, when Congress responded to the increasing public concern about the deplorable conditions at Monticello.

One question here, which will be easily answered when someone looks at T.J. Randolph's will: wasn't there a residuary clause?  The Monticello Association website implies not (or if there was that it distributed the property to all his heirs, by which I think they them mean his issue).  If there was no residuary clause, then I guess that the cemetery descended to T.J. Randolph's issue and now, many generations later, they own in varying shares the property.  (This is implied in this 1882 New York Times story as well.)

The Monticello Association--a 501(c)(3) association--is currently managing the gravesite.  So I'm curious what their relationship to the cemetery is.  Have all the heirs given them the authority to manage the graveyard?  I'm guessing that there may be a deed to the Jefferson descendants somewhere and that the Association is the representative of the descendants.  But what happens when other putative descendants (like the issue of Jefferson and Hemings) appear?  They wouldn't take as heirs of T.J. Randolph (and presumably wouldn't have the right to be buried in the cemetery); but they still have the right to visit the cemetery under the Virginia cemetery access statute.  Makes for some mighty interesting questions in cemetery law.

But then a google led to this story from the New York Times in 1911, which alludes to another grant.

The public domain image of Thomas Jefferson's grave is from wikipedia.

Listed below are links to weblogs that reference Who Owns Thomas Jefferson's Grave?: