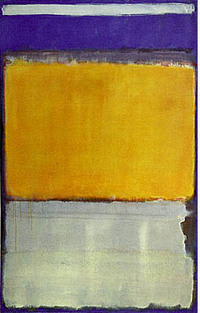 Close on the heals of the New York Times' discussion of a conflict over Thomas Jefferson's grave, (which I discussed here) we have news of a dispute over the possible exhumation and reburial of Mark Rothko.

For 38 years the body of the artist Mark Rothko has rested in an unassuming cemetery on the North Fork of Long Island, a quiet reminder of both the Abstract Expressionist legacy and one of the harshest legal battles ever to rock the art world.

Now, in a potential addendum to the history books that threatens to resurrect bitter memories of the long fight over Rothko’s estate, the artist’s daughter and son have petitioned a New York State judge to clear the way to have their father’s remains disinterred and reburied in a Jewish cemetery in Westchester County.

Endnote: Rothko's 1952 No.10 is from the National Galley's website; the painting is in the collection of the Museum of Modern Art.

The New York Times this morning has a fascinating story about two neighbors, eight redwood trees, a solar panel, and - yes - a criminal prosecution for violating a statute called the Solar Shade Act.  This has it all:  a parable of first-in-time vs. solar access, failure of bargaining, nuisance and conflicts between two environmental goals, and, perhaps, the law of unintended consequences.  Great reading!

Eugene Volokh has a post on Fair Housing Council v. Roomates.com.  The case is mostly about some on-line immunity issues, but an underlying issue about expressing preferences for roomates will be a familar one to propertyprofs.

This has been a poorly kept secret for a while now, but since Brian Leiter is reporting it, we can now announce that our own certified rock star Al Brophy will join the faculty at UNC Chapel Hill next year.  Apparently, he will have some fancy title.

Get your library to order a copy today!

Over at Scotusblog, Lyle Denniston has a post on a cert petition to the Supreme Court presenting some post-Kelo public use issues.

California recently passed legislation that creates retroactive, descendible rights of publicity. The New York State Assembly is poised to enact similar legislation. Legal recognition of postmortem rights of publicity permits a decedent’s named beneficiaries or heirs to control (and financially benefit from) use of a deceased personality’s image and likeness. Legislators, proponents of these laws, and legal commentators have overlooked two significant federal estate tax consequences of these new state law property rights. First, a descendible right of publicity likely will be included in a decedent’s gross estate for federal estate tax purposes. Second, the estate tax value of rights of publicity easily could exceed the estate’s liquid assets available to pay taxes. These tax concerns could be eliminated, however, by rewriting the statutes to limit a decedent’s ability to control the disposition of any postmortem rights of publicity.

The Washington Post has an interesting story (free regist. required) about bus tours of foreclosed properties by potential buyers.  An excerpt:

A new form of sightseeing is catching on in the Washington suburbs, offering investment advice, free cookies and some eye-opening discoveries among the empty ramblers and forsaken townhouses of the region.

They are known as foreclosure tours or home buyer tours. One that originated yesterday at a Northern Virginia Long and Foster office was labeled "The Centreville Gateway Foreclosure Tour of Homes." More than 30 "tourists" squeezed onto a green passenger bus for a three-hour spin through parts of Fairfax, Loudoun and Prince William counties. Some said they were looking for their first home, others were looking for a good investment, and some were just looking.

"I figure it's probably a good time to get into the housing market," said Anita Walter, a Centreville resident who saw an ad for the tour in a community newspaper. "I'm curious to see what's out there, but I want a home that will be my home.

"I'm not trying to turn around and make a quick buck," she said.

For homeowners and investors worried about the state of the housing market, the tours and their growing popularity are a sign that falling housing prices are attracting an increasing number of potential buyers -- including those willing to travel in packs. Long and Foster offices have staged similar tours in Manassas, Gainesville, Alexandria and Mount Airy. Ones are planned in Prince George's County and Southern Maryland.

"The general public doesn't know how to find foreclosed properties," said Pat Bogenn, a Long and Foster real estate agent. "There are deals out there, but there are also pitfalls.

"With bank-owned properties, most people don't know that they're buying 'as-is,' " she said. Potential buyers might need to have utilities reconnected just to find out whether pipes are broken or the septic system works, Bogenn said.

The main draw of the tours is that they are a kind of rolling foreclosure seminar, counseling participants in everything from financing to property inspection to legal concerns. . . .

There was a home inspector on board to point out maintenance concerns and estimate repair costs, as well as two lenders and a real estate attorney. All of the homes on the tour were vacant and bank-owned, which eased some of the ambivalence participants felt about taking over a property its previous occupants might not have parted with willingly. . . .

As the tour illustrated, that amount of money will buy a lot more in Northern Virginia now than a year ago. One stop on the tour was a massive townhouse in Centreville that sold for $519,000 in February 2007 and is now listed at $399,000. Then there was a hearty brick rambler on a quiet Manassas Park street with a huge yard, hardwood floors and a finished basement. Asking price: $284,000.

Rosser on Property Consequences of Indians

Ezra Rosser (American U.) has posted Protecting Non-Indians from Harm: The Property Consequences of Indians on SSRN.  Here's the abstract:

This article is an exploration of the assumption, last made by the U.S. Supreme Court in City of Sherrill v. Oneida Indian Nation of New York, that non-Indian property owners are harmed by Indian acquisition and control of land. Accepting for the moment the Court's prioritization of a non-Indian perspective, the article explores (a) what lies behind non-Indian resistance to Indian land ownership, and (b) whether in fact non-Indians are harmed by proximity to Indian land. The article combines in its analysis core property law concepts with an empirical examination of the changes over time in assessed land value of properties located near Indian land.

Yesterday, the Supreme Court ruled in favor of Delaware in its riparian use dispute with New Jersey.  The New York Times has an article on the case.  The opinions are available here.  Choice quote from the Times about Justice Scalia's dissent:

What was so “extraordinary” about a wharf to unload liquefied natural gas, he asked. “Would a pink wharf, or a zig-zagged wharf qualify? How about one for the transfer of “tofu and bean sprouts”?