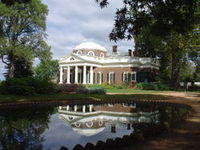 Today's New York Times brings this story ("Atop a Hallowed Mountain, Small Steps Toward Healing,") about the Jefferson family cemetery.  It is "owned by the lineal descendants of Thomas Jefferson. Last year about 250 people with ancestral ties to Monticello — including descendants of Jefferson and Sally Hemings, a slave — met at the homestead for a reunion of sorts, but they were not allowed into the graveyard."

A few excerpts from the story:

Halfway down the mountain sits the Jefferson family cemetery, owned by the lineal descendants of Thomas Jefferson and overseen by the Monticello Association, which is made up of some of those descendants. Proud names call from tombstones behind the locked gates: Randolph, Taylor, Eppes, Coolidge. But no Hemings. ...

In 2002 the association voted overwhelmingly not to extend membership to the descendants of Sally Hemings, arguing that some scholars had found insufficient evidence of a Thomas Jefferson blood connection but inviting them to apply again should further evidence surface. That vote led to charges of racism, denials of racism — a kind of family quarrel.

Still, relationships have developed. Last year about 250 people with ancestral ties to Monticello — including some Hemings and Jefferson descendants — met at the homestead for a reunion of sorts that was rooted in the belief that community transcends bloodlines.

Before the gathering, one of its organizers, a descendant of Jefferson named Prinny Anderson, attended a meeting of the Monticello Association, of which she is a member, to ask whether those coming for the event might be allowed inside the Jefferson graveyard. Ms. Anderson, of Durham, N.C., says she made no mention of Hemings, “although that was the elephant in the room.”

Her request was overwhelmingly denied, she recalls, on the grounds that “it would damage the grass. And I say that with a straight face.”

Steve Moyer, another Jefferson descendant and the president of the Monticello Association, confirms that grass was a central concern, though other worries included the fragility of tombstones. The grass had taken years to grow, he says, and to have 250 people tromping through there in hot and dry July was “the last thing we needed.”

Sounds like a perfect application of cemetery law.  You may recall that Virginia has a particularly generous cemetery visitation statute.  It provides for broad rights of access by relatives of the decedent and researchers:

A. Owners of private property on which a cemetery or graves are located shall have a duty to allow ingress and egress to the cemetery or graves by (i) family members and descendants of deceased persons buried there; (ii) any cemetery plot owner; (iii) any person engaging in genealogy research, who has given reasonable notice to the owner of record or to the occupant of the property or both.  The landowner may designate the frequency of access, hours and duration of the access and the access route if no traditional access route is obviously visible by view of the property.  The landowner, in the absence of gross negligence or willful misconduct, shall be immune from liability in any civil suit, claim, action, or cause of action arising out of the access granted pursuant to this section.

B. The right of ingress and egress granted to persons specified in subsection A shall be reasonable and limited to the purposes of visiting graves, maintaining the gravesite or cemetery, or conducting genealogy research.  The right of ingress and egress shall not be construed to provide a right to operate motor vehicles on the property for accessing a cemetery or gravesite unless there is a road or adequate right-of-way that permits access by motor vehicle and the owner has given written permission to use the road or right-of-way of necessity. . . .

Want to know more about the ancient rights of the graveyard?  Check out this paper, which, by the way, talks about descendants of enslaved people seeking to visit the graves of their ancestors.

Anyone want to hazard a guess what our friend Mr. Jefferson would say about this?  Perhaps something akin to what he said about the Natural Bridge--that the bridge is a public trust.  Perhaps he'd consider his grave a public trust as well....

Update:  I have a fuller discussion of this over at Oxford University Press' blog.

Endnote: I couldn't find a public domain image of the Jefferson family cemetery, so I used a wikipedia image of Monticello instead.