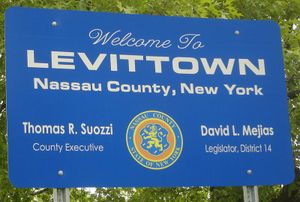 NPR has an interesting story on the bankruptcy of Levitt and Sons, the firm that developed Levittown.  The story also discussed the impact of the bankruptcy on buyers in a Levitt project in Florida:

Among those customers is Bill Quattrocchi, who lives in Tradition, a big development for active seniors — those 55 and older — in Port St. Lucie, along Florida's Atlantic Coast. As he drives a golf cart through the neighborhood, he notes a road that "was supposed to lead to a clubhouse."

"It leads to nowhere," Quattrocchi says as he drives along. "They never completed this road to the other section."

While other builders are still selling houses in Tradition, Quattrocchi and his neighbor, Bob Wilson, have the misfortune of living in a section developed by Levitt and Sons. It's a neighborhood where all construction stopped after Levitt declared bankruptcy; out of 1,200 planned homes, only 90 are currently occupied.

Quattrocchi wheels his golf cart through an area where residents live across the street from half-finished houses. He notes that "available" signs have been removed from the fronts of the homes.

Wilson points to a row of empty houses. He says in some cases the homeowners were foreclosed; in others, the buyers "just walked away." . . .

[T]here's another group of Levitt customers who also are bitter at how they've been treated: those who put $40,000 and $50,000 deposits down on a Levitt home. Jerry Greenfield is one of them: He put down $45,000 on a Levitt home at Tradition and included another $25,000 for upgrades. When he heard about the bankruptcy, he figured his deposit was protected because he had put it in an escrow account.

"I felt that, jeez, I don't have a problem here," Greenfield says. He expected to get a refund for his deposit. But he soon found out it's not quite that easy.

That's because Florida law allows a builder to access money in an escrow account if it provides a bond. Greenfield had to hire a lawyer and is now working to recover his deposit from the bonding company. And that's just the deposit — he doubts he'll ever see the $25,000 he paid Levitt for upgrades.

Greenfield says he's learned that, among the dozens of people who had deposits with Levitt, he's one of the fortunate ones. Most didn't put their deposits in escrow.

Listed below are links to weblogs that reference Levitt Bankruptcy: