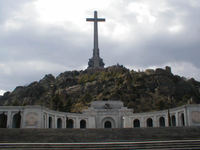 Continuing with our occasional theme of monument law (and thanks to a pointer from Carl Christensen), here's a New York Times story on Spain's recent actions regarding monuments to Franco and the Spanish Civil War.  The article begins:

Last month Spain passed a law that doesn’t make much sense, on its face, but says quite a lot about Europe in the new century.

The Parliament, fulfilling a campaign promise from 2004 by Prime Minister José Luis Rodríguez Zapatero, ordered that families wanting to unearth bodies of relatives killed during the Spanish Civil War of the late 1930s or who suffered as a political consequence of General Francisco Franco’s four-decade-long regime should get full cooperation from the state, and at the same time that every province in the country must remove remaining monuments to Franco.

The public domain image is of the Valle de los Caídos (the Valley of the Fallen), which Franco ordered built as a monument to those who died in the Civil War.  As the Times article describes the monument, "During the 1950s thousands of prison laborers tunneled hundreds of yards into a solid granite mountain ridge to build one of the world’s biggest and most lugubrious basilicas and a Civil War memorial, beneath a cross nearly 50 stories high."  It is considered to be mostly a monument to the Nationalists; however, some Republicans are buried in the valley.  It is from our friends as wikipedia.

Al Brophy
Comments are held for approval, so they will not appear immediately.

Listed below are links to weblogs that reference Monumental Silence in Spain: