The Sale of Virginia's Natural Bridge 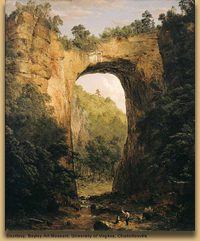 Well, I'm working on the copyedits of an article on antebellum literary addresses and that's led me to be reading some of John Reuben Thompson's poetry.  (Antebellum historians, though perhaps no one else, will recall that Thompson was editor of the Southern Literary Messenger.)  Dig this poem:

A SALE! A sale! Earth's proudest things are daily bought and sold,
And art and nature coincide in bowing down to gold.
Alas! at such a sale as this sad thoughts within us rise
Until the Bridge becomes to us a very Bridge of Sighs.

Ho! citizens of Lexington, ho! keepers of the springs,
To whom the Bridge a revenue in transient travel brings,
Rebuke the cruel auctioneer with your severest frown
Before in his destructiveness he seeks to knock it down!

At least, ere he proceeds to such extremity as that,
Be good enough to bid him first remember what he's at.
Let even-handed justice, too, cry loudly in his ears
That he should give this ancient Bridge a trial by its piers.

Now, by the bones of Captain Smith, how shall he dare to cry
(For crying's his "vocation, Hal," though with unmoistened eye)?
That this great span which hath endured for centuries unknown,
At bidding of a purchaser is going, going, gone!

Oh, for a Wordsworth's flowing lines to sonnetize the Bridge
And paint in Tintern Abbey tints the Valley and the Ridge,
But what's words worth in such a task as lies before us here,
As little as to give the face of placid Windermere.

The only ode, O noble Bridge, that should be sung to thee
Is heard among the mountain pines and heard upon the lea,
A Miserere lofty as that anthem of the surge
When on the sunset strand it chants the day's departing dirge.

The earth is full of stately works of monumental pride—•
The famed Rialto thrown above the dark Venetian tide—•
And pyramids and obelisks of ages passed away—
And friezes of Pentelicus majestic in decay:—

But arches, domes, colossal piles that human skill has wrought,
All, all, when in comparison with thy proportions brought,
Are fleeting as the palaces fantastically vain
That Russian monarchs rear in ice on Neva's frozen plain!

A Saxon priest once stood beneath the Coliseum's wall
And augured that the globe itself should topple with its fall!
Oh, when this mighty arch of stone shall from its base be hurled
An elemental war shall work the rum of the world!

Now how's that for a property poem?!

The bridge, which was once owned by Thomas Jefferson, is up for sale again.  Frederick Church's landscape of the Natural Bridge is from our friends at the University of Virginia.  I'd say the poem's downright Emersonian, except that Thompson was a proslavery zealot.  But that's a story for another day.  Those who are interested, however, can find some mighty important and interesting speculation in Peter Carmichael's The Last Generation (discussed by me in Reviews in American History here).

Listed below are links to weblogs that reference The Sale of Virginia's Natural Bridge: