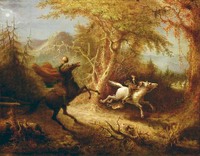 We're on fall break in Tuscaloosa, so I have a little more time than usual.  Been thinking about the relationship between landscape art and property again recently.  Partly this is because it's October and I need to get my Halloween post pulled together, so I've been looking for some images of ghost stories where property is central.  That, of course, leads me to think about the Legend of Sleepy Hollow, where hierarchy is central.  Not so much about property, but who's there first (a key issue in property, of course).  And also to John Quidor's evocative painting of the "Legend of Sleepy Hollow," which is in the Smithsonian.

The National Gallery of Art also has Quidor's Rip Van Winkle, another charming landscape painting based on the short story of Quidor's friend Washington Irving.  Both Legend of Sleepy Hollow and Rip Van Winkle are attempts to come to terms with a wildly changing American culture.  I'm increasingly thinking that the way to talk about legal change in the antebellum United States is through the trope of progress.  Of course, "progress" had different meanings depending on whom you spoke with.  But it's a great organizing principle--and it suggests how law correlates with progression in the physical sciences and with economic and moral thought.  So we expect change and embrace it, even as we find it destabilizing.  Writers on law from William Sampson to Emerson to Story to Thomas Dew all recognize that legal rules are evolving and ought to evolve--that they are bound up with their social and historical context.  What is controversial is when there ought to be legal change and in what direction.  Thus, we get pitched conflicts in cases like Charles River Bridge.  Is there a property right there?  And if there is, how much should we protect it?

But I've also been working away on some literary addresses and again am struck by how often they reference property.  Try George Robertson's address to the Deinologian Society at Transylvania.  He speaks of the evils of slavery, then turns away to talk about the bounties of civilization.  Robertson employs images of landscape:

But these slight blemishes at which we have just glanced—what, are they in the sublime prospect which this day opens. ;o our view? They are but the spots on the sun; and though the microscopic vision of misanthropy may magnify them, they are lost in the great panorama which our country presents to the eye of an instructed and comprehensive patriotism. Could Boone and Harrod and Logan —when, in this once "land of blood," they first trod in the tracks of the Indian and the Buffaloe—have dreamed that what we now behold in this smiling West, would so soon have succeeded their adventurous footsteps, how would such a vision have cheered them amidst tho solitude and perils which they encountered in aiding to plant civilization in the wilderness! But oh! the pilgrim band of Plymouth Rock; the offcast germ of the once leafless, once sapless, tree of light—what holy joy would theirs have been, had their last lingering glimpse of the green fields of their childhood been gilded with a hope, that the then house-less solitude of their refuge would, so soon, or ever be transformed into a vast cultivated garden, the abode of that liberty, religion and law, for which they had abandoned forever the comforts and endearments of the homes of their birth?

The image above right is George Caleb Bingham's Daniel Boone Escorting Settlers Through the Cumberland Gap, which is from Washington University's Gallery of Art (though I first saw it in person and was captivated by it, I think, in 1991 at the National Gallery).

Images of landscape, which help connect people to land and to the ideas of liberty and property.  Great stuff.  And I hope the makings of some fun, further speculation on the relationship between property law and landscape art.

Listed below are links to weblogs that reference More on Landscape Art: