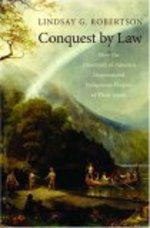 Thanks for the opportunity to participate.  Al has asked me to say a few words about my recent book, Conquest by Law (2005), which has just come out in paperback.  Conquest by Law is a case history of Johnson v. M’Intosh, the foundational Indian Law decision as well as the first case taught in many Property Law classes.  Johnson gave rise to the discovery doctrine, according to which, on the discovery of the North American continent, European discovers acquired fee title to all discovered lands, leaving the indigenous inhabitants an occupancy right alienable only to the discovering sovereign.

The book (144 pages) is written for a general educated audience and offers an insider’s glimpse into the process of litigation and adjudication in the Early Republic.  It was 14 years in the works and is built on previously unused documents – the corporate records of the Illinois and Wabash Land Companies, the effective plaintiffs in the case -- which I discovered in the possession of the family of the Companies’ last secretary.  Conquest by Law provides a narrative account of the process of land acquisition and judicial lawmaking during and after John Marshall’s tenure on the Supreme Court.  Many of the figures students will encounter in their first year courses and Constitutional Law make appearances in the book, including Marshall, Daniel Webster, and Joseph Story, as do figures they will know from US History, including Thomas Jefferson, Andrew Jackson and William Henry Harrison.

It is my hope that students will finish the book feeling they have a much better grasp of the complex origins of our judicial system and property law regime.

Lindsay Robertson
Comments are held for approval, so they will not appear immediately.

Listed below are links to weblogs that reference Conquest By Law:

I've ordered the book. Do you have any strong feelings (i.e., differences of opinion, judgment, etc.) about Stuart Banner's recent book, How the Indians Lost Their Land...?