I love Thanksgiving.  I suppose if you wanted to overthink it, you co 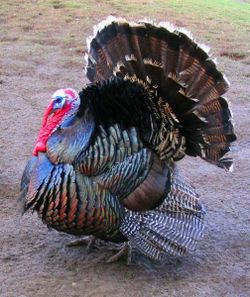 uld use the day as an occasion to review Johnson v. M'Intosh or some other historical facts.  I prefer to use the holiday to give sincere thanks for the many good things in my life, and to eat a lot.  Thanksgiving strikes me as a very traditional and conservative holiday.  In that spirit, I'd just like to share my humble opinion that all true Americans should eat turkey on Thanksgiving, just like the Pilgrims and the Indians did (in the elementary school version, at any rate).  Eating anything else strikes me as un-American.  I'll make an exception for anything you hunt and kill yourself.  But one friend of mine told me once that her family ate prime rib on Thanksgiving.  I suggested that she and her family move to Canada.

Listed below are links to weblogs that reference Happy Turkey Day:

Here, here. I might as well put in my 2 cents on the matter. Always fascinated by how different people and families celebrate differently...with touches of their own ethnicities and upbringing. In my German/Irish family, we had all the traditional T-day foods, our stuffing (remember, stuffing is what you get when you actually "stuff" it into the turkey and cook it that way; "dressing" is what you get if you cook it separately outside of the turkey)was "wet", not bone-dry, and was chock full of mushrooms, onions, and very heavy on the sage---LOVE IT! Regrettably, my mother is too old now to do any of that massive sort of cooking and it's been a good 20 years since I had her stuffing--sniff, sniff.

We always had the "cranberry worm" out of the can, and only rarely had the actually berry in its sauce. Always had candied sweet potatoes, not just yams.

The big thing in our house was the evening turkey sandwiches and pumpkin pie and coffee....served around 9 or 10 at night, while everyone was watching the super duper TV special. Those were the days back in the 70s when cable existed only the mind of Ted Turner and network TV always had on something pretty good because most of America was still too gased (literally) out to get off the sofa.

However, when I married into an Italian family, the tenor of the T-day meal changed a little. Although turkey was there, for some bizarre reason, a side of eggplant parmesan makes a force to be reckoned with if we're at my mother-in-law's. Of all day--eggplant permesan!?! Fortunately, my father-in-law, bless his Italian heart, is an oenophile (wine wacko). His wine cellar is formidable and there's always 3 bottles of different wines on the table: 2 for the meal and 1 for dessert.

And of course, as parents, we get the joy of seeing our own children pick over their turkey and potatoes now...they've no idea that every thing they do on this day, with family, with cousins, with grandma and grandpa...will quietly permeate their tiny, yet remarkable little consciences until one day they too may comment similarly on some far away blog in the future...

HAPPY THANKSGIVING TO MESSRS. BARROS, BROPHY, DUNCAN AND ALL THE BLOG READERS OUT THERE!

Just another quick T-day memory, some of you may be old enough to remember this insanely funny TV moment...

The show was "WKRP in Cincinnati"..which told the story of the daily craziness of the staff of the radio station WKRP in (you get the idea). The news guy at the station was "Les Nessman", winner of the coveted "Silver Sow" award for reporting, and easily the shyest, nerdiest, and wall-flowerest man on the planet.

The T-day episode revolved around a promotional stunt the radio sponsored where they took dozens upon dozens of turkeys up into a helicopter flying high over Cincinnati, then released them so they could "fly" to the surface. Les Nessman was the "man on the spot" reporter describing the action.

The joke? None of the looneys at the station knew turkeys couldn't fly!! So there's eager Les Nessman, oblivious to what's about to transpire, happily waiting to describe the action to the listening audience. He looks up into the sky, announces the helicopter and that the turkeys have been released. Then, wait a minute...UH-OH!!!!

In an homage to the famous radio reporter's broadcast of the Hindenberg tragedy at Lakehurst, New Jersey ("...oh my god, the humanity..."), Less is traumatized as he observes the turkeys hitting the pavement and the look on his face was, of course, indescribably precious.

At the end of the episode, after all the fallout (as it were) had subsided, Mr. Carlson, the station owner, was discussing the matter with the station manager, Randy Travis (the only member of the staff with half a brain). Carlson (played by the late Gordon Jump--the second famous "Maytag Man" in the famous commercials) delivered one of the greatest lines in TV comedy history.

Reflecting on the moment, he said to Randy: "...as god is my witness, I thought turkeys could fly..."