Steal This Book: They Did. And Hippie Thoughts About Property Rights 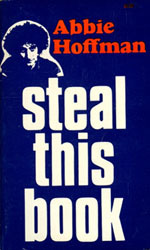 Recently I did a search for Abbie Hoffman's Steal This Book.  (I know, I know, I should be working on my monument law essay, but I was taking a break.)  I've heard about Steal This Book for years, but I'd never known what it was about.  You know what: it's available to read in full text on the net.  Hmm, why doesn't that surprise me?  It's on a tenants' rights website, which propertyprof readers may find of particular interest.

What did surprise me is the content of Steal This Book.  I might have guessed it would be about opposition to property rights.  It's not what you might expect.  At least, it's not what I expected.  What I now realize is that it's sort of a how-to manual to put one over on the "system."  Some of it's mildly amusing; lots of it is downright anti-social; parts of it are really scary.  It's an artifact of the late 1960s.  Historians trying to recover the mentality of 1960s radicals will be turning to it.

I didn't know that Hoffman had written parts of it while in jail, which he identifies as "that graduate school of survival.  Here you learn how to use toothpaste as glue, . . . and build intricate communication networks.  Here too, you learn the only rehabilitation possible--hatred of oppression."  Hmm.

Listen to how dated this stuff from the introduction on property rights sounds:

The first section--SURVIVE!--lays out a potential action program for our new Nation.  The chapter headings spell out the demands for a free society.  A community where the technology produces goods and services for whoever needs them, come who may. It calls on the Robin Hoods of Santa Barbara Forest to steal from the robber barons who own the castles of capitalism.  It implies that the reader already is "ideologically set," in that he understands corporate feudalism as the only robbery worthy of being called "crime," for it is committed against the people as a whole. Whether the ways it describes to rip-off shit are legal or illegal is irrelevant.  The dictionary of law is written by the bosses of order.  Our moral dictionary says no heisting from each other.  To steal from a brother or sister is evil.

Then there are some mildly amusing lines about how to get free land:

Despite what you may have heard, there is still some rural land left in America. The only really free land is available in Alaska and remote barren areas of the western states. The latest information in this area is found in a periodic publication called Our Public Lands, available from the Superintendent of Documents, Washington, D.C. 20402. It costs $1.00 for a subscription. Also contact the U.S. Department of the Interior, Bureau of Land Management, Washington, D.C. 20240 and ask for information on "homesteading." By the time this book is out though, the Secretary of the Interior's friends in the oil companies might have stolen all the available free land. Being an oil company is about the easiest way to steal millions. Never call it stealing though, always refer to it as "research and development."

Continental United States has no good free land that we know of, but there are some very low prices in areas suited for country communities. Write to School of Living, Freeland, Maryland, for their newspaper Green Revolution with the latest information in this area. Canada has free land available, and the Canadian government will send you a free list if you write to the Department of Land and Forests, Parliament Building, Quebec City, Canada. Also write to the Geographical Branch, Department of Mines and Technical Surveys, Parliament Building, Quebec City, Canada. Correspondence can be carried out with the Communications Group, 2630 Point Grey Road, Vancouver 8, British Columbia, Canada, for advice on establishing a community in Canada. The islands off the coast of British Columbia, its western region and the area along the Kootenai River are among the best locations.

If you just want to rip off some land, there are two ways to do it; openly or secretly. If you are going to do it out front, look around for a piece of land that's in dispute, which has its sovereignty in question-islands and deltas between the U.S. and Canada, or between the U.S. and Mexico, or any number of other borderline lands. You might even consider one of the abandoned oil-drilling platforms, which are fair game under high seas salvage laws. The possibilities are endless.

If you intend to do it quietly, you will want a completely different type of location. Find a rugged area with lots of elbow room and plenty of places to hide, like the Rocky Mountains, Florida swamps, Death Valley, or New York City. Put together a tight band of guerrillas and do your thing. With luck you will last forever.

Sounds like they should be talking a little about adverse possession, though, don't you think?  And perhaps even something on squatters' rights, a topic you sometimes hear mentioned (like Gregory Duhl's important paper), but never in law school.  Sort of simlar to citizens' arrests.  Ever hear anyone talk about that in law school?  I haven't heard a serious discussion of it, though perhaps we could use a student note on it.

Then there's this about a free education.  Don't know if any of the free universities Hoffman mentions are still in existence.  I hear this line invoked now and again "The only reason you should be in college is to destroy it."  Not a sentiment I have much respect for, but there you have it.... There's certainly some sound advice on auditing classes--always a good way to get some free knowledge.  Pretty soon you won't even need to attend class; you'll be able to download podcasts.

Usually when you ask somebody in college why they are there, they'll tell you it's to get an education. The truth of it is, they are there to get the degree so that they can get ahead in the rat race. Too many college radicals are two-timing punks. The only reason you should be in college is to destroy it. If there is stuff that you want to learn though, there is a way to get a college education absolutely free. Simply send away for the schedule of courses at the college of your choice. Make up the schedule you want and audit the classes. In smaller classes this might be a problem, but even then, if, the teacher is worth anything at all, he'll let you stay. In large classes, no one will ever object.

There are Free Universities springing up all over our new Nation. Anybody can teach any course. People sign up for the courses and sometimes pay a token registration fee. This money is used to publish a catalogue and pay the rent. If you're on welfare you don't have to pay. You can take as many or as few courses as you want. Classes are held everywhere: in the instructor's house, in the park, on the beach, at one of the student's houses or in liberated buildings. Free Universities offer courses ranging from Astrology to the Use of Firearms. The teaching is usually of excellent quality and you'll learn in a community-type atmosphere.

Probably not going to get a law review article out of this on "hippie jurisprudence," but interesting artifacts nonetheless.

Listed below are links to weblogs that reference Steal This Book: They Did. And Hippie Thoughts About Property Rights: