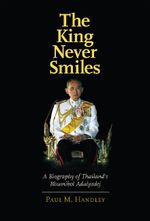 This is a little off the usual topic for propertyprof, but it does relate to university presses, a topic that we talk about every now and then here.  So I'll try to pass it off under a "shelter rule."  That is, it's on a topic of interest to propertyprofs, even if it's not property.  (We invoke this rule when talking about law review rankings as well.)

The New York Times has an article (entitled "A Banned Book Challenges a Saintly Image of Thai King") on Paul Handley's book The King Never Smiles (Yale University Press, 2006), about King Bhumibol Adulyade of Thailand.  According to the article, one of Handley's central points is that the king--who has enjoyed very favorable press--has been more concerned with order than democracy.

What particularly interested me were the efforts made by the Thai government to suppress the book, including sending representatives to meet with President George Bush, with Yale University's president, and (apparently) with the director of Yale University Press.  Extraordinary, particularly for a book from a university press.  The press did push back the publication date (so that it would not coincide with the sixtieth anniversary of the monarch's ascension) and also permitted, apparently, Thai officials to comment on the manuscript before it was published.  Both reasonable, though I should imagine, unusal concessions.  (Also, I should emphasize that I am in no position at all to evaluate the merits of Handley's thesis.)

Not surprisingly, the publicity surrounding the attempt to supress its publication (and its banning in Thailand) has led to a lot of sales.  This afternoon it was ranked #259 on Amazon--an astonishingly good performance for a university press book.  Exciting times at YUP, no doubt, even if the king is not smiling....

Listed below are links to weblogs that reference A Banned Book: The King Never Smiles: