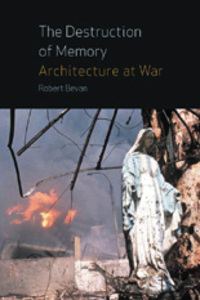 Yesterday's mail brought a wonderful volume, The Destruction of Memory: Architecture at War.  It discusses a topic near my heart: monuments (in this case mostly buildings, but also a few bridges).  And in this case, he's interested in what meaning destruction of buildings has for the culture that produced them.  Bevan sweeps across centuries, indeed millenia--from Giant Buddahs built in the sixth century C.E., to Armenian architecutre stretching back to the seventh century C.E., to Muslim architecture of the fifteenth and sixteenth centuries in Bosnia, to Jewish synagogues destroyed during World War II, to 9/11.

And it reminds me, of course, of the destruction wrought by the Tulsa race riot--which, among many other things, was about destroying the houses, churches, and shops of an entire community.  It was, as a caption of a postcard printed after the riot said, an episode of "running the negro out of Tulsa."  And the demolition of urban communities, what Justice Clarence Thomas referred to as "negro removal" (a play on "urban renewal") in Kelo, is part of this story as well, though Bevan does not discuss it.

The destruction of buildings is about the destruction of monuments to culture. There are some haunting photographs in the book, which tell stories about which I knew less than I should.  There are several pictures of beautiful medieaval synagogues (51 and 52).  At left is a sketch of the synagogue  built in Gombin, Poland in 1710, which was burned in 1938.  There are other illustrations of an Armenian monastary built from the 7th to 11th centuries C.E.  It survived until the 1940s when it was destroyed as part of the persecution of Armenians in Turkey.

This has some implications for how we think about architecture, destruction of culture, and even building names.  Those who are interested in renaming buildings will have cause to question their views after reading The Destruction of Memory.  For in erasing names we lose something, our heritage.  Sometimes that loss of heritage is itself a tool of forgetting that is important to those in power.

One obvious question is how does this help us understand legal history?  What's the equivalent for law of the monuments that are destroyed?  One obvious answer is in law some monuments are written on paper in the form of judicial opinions.  Those opinions recall how we remember events like the Civil War, Reconstruction, and the end of Reconstruction--or what we're now increasingly calling de-construction.  Judicial opinions can alter our memory of history, of precedent, of constitutional provisions.  So judicial opinions can be destructive, as well as creative.

Now a note that comes close to home:  On my campus, the University of Alabama, the burning of buildings came during the Civil War.  In the closing days of the war in April 1865, Union soldiers burned most of the campus, including the library, which was one of the largest in the nation at the time.  My colleague Paul Pruitt and I are working on publishing the University of Alabama library catalog from 1848, as a way of remembering the University's literary culture.  Paul's idea is to call the volume Burned Books.  I think that's a terrific title.

Update:  The University of Chicago Press website picked up our discussion of Bevan.

And I highly recommend Bevan's Destruction of Memory; it's an important and moving book.

Listed below are links to weblogs that reference Robert Bevan's Destruction of Memory: