Many PropertyProf readers will be familiar with Hernando de Soto's important book The Mystery of Capital.  To over-simplify a bit, de Soto's key insights can be boiled down to two points.  First, de Soto argues that market economies can't succeed without good property and legal systems.  Even de Soto's most ardent critics tend to buy this point, which is an important one -- a market system imposed on, say, a post-communist country is very likely to fail in the absence of a functioning private property system. 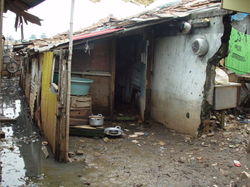 Second, de Soto asserts that poor people the world over have possession of property that in the aggregate is worth billions (or trillions) of dollars.  Most of this property, however, is held through property systems that at best are informal and extra-legal.  The absence of legally-enforceable title makes this property "dead" capital -- difficult to sell and impossible to use as collateral for a loan.  De Soto therefore advocates for aggressive efforts to give the poor formal title to their property.  Though in places he is more cautious, de Soto often seems to suggest that this type of titling effort would magically lead to dramatically improved living standards for the poor.  This part of de Soto's thesis has been more controversial than the first.

Earlier this year, two new and important studies came out that test de Soto's hypothesis.  I've been meaning to blog about them for a while, and was reminded of them by a good article in this week's Economist.

The first study, Property Rights for the Poor:  Effects of Land Titling, was authored by Sebastian Galiani (Universidad de San Andres) and Ernesto Schargrodsky (Universidad Torcuato Di Tella).  The study takes advantage of a fascinating natural experiment that took place in a poor suburban area outside of Buenos Aires.  In the early 1980s, a group of squatters occupied wasteland that they thought was owned by the government.  It turned out that the land in fact was privately owned.  A law expropriating the property was passed with the intention of turning title over to the squatters.  Some of the private owners accepted the government's offer of compensation; title to this property was then transferred to the squatters.  Other owners contested, and continue to contest, the compensation amount in the slow Argentinian courts.  (It appears that these owners are only contesting the compensation, and are not arguing that the takings themselves were illegal).  As a result, some residents of the area have had title for twenty years while some of their similarly-situated neighbors still do not have title.

The authors summarize their findings as follows:

Exploiting this natural experiment, we find significant effects on housing investment, household size, and child education.  The quality of the houses is substantially higher in the titled parcels.  Moreover, households in the titled parcels have a smaller size, both through a diminished presence of extended family members and through a reduced fertility of the household heads, and they invest more in the education of their children.  However, we find only modest effects on access to credit markets as a result of entitlement, and no improvement in labor market performance.  Our results suggest that land titling can be an important tool for poverty reduction, albeit not through the shortcut of credit access and entrepreneurial income, but through the slow channel of increased physical and human capital investment, which should help to reduce poverty in the next generation.

On the improvement in housing stock, "[t]he proportion of houses with good quality walls rises by 40 percent under land titling, while the increase reaches 47 percent for good quality roof."  The impact on school performance was also striking, with children in titled-households staying in school an average of 0.6 years more than children in non-titled households.  That might not sound like that much, but the authors note that the improvement is comparable to that achieved by the Progresa anti-poverty program in Mexico, which makes direct monetary payments to families contingent on their children's regular school attendance.

The land-titling did not make as noticeable an improvement in access to credit and labor markets, with only 4% of the titled households able to obtain mortgages and no discernible differences between the titled and control households in measures of income and employment status.  Access to credit is the focus of the second study, Do Property Titles Increase Credit Access Among the Urban Poor?  Evidence from a Nationwide Titling Program, by Erica Field (Harvard University) and Maximo Torero (International Food Policy Research Institute).  From the abstract:

To test whether proof of property ownership promotes the use of low-income housing as collateral, we evaluate the impact on credit supply of obtaining a property title through a land-titling program in Peru.  By directly observing whether loan applicants are requested to provide collateral, we can isolate the effect of property titles on credit supply from their effect on demand by comparing loan approval rates when titles are requested to rates when they are not.  Our results indicate that property titles are associated with approval rates on public sector loans as much as 12% higher when titles are requested by lenders and no relationship between titles and approval decisions otherwise.  In contrast, there is no evidence that titles increase the likelihood of receiving credit from private sector banks, although interest rates are significantly lower for titled applicants regardless of whether collateral was requested.

The failure of commercial banks to increase their rate of lending to households that obtain property titles through government programs has important implications for the potential effects of property reform on economic growth and poverty reduction.  One explanation for this failure is that titling programs reduce banks' perception of their ability to foreclose.  This is supported by data from Peru indicating that individuals with title have less fear of losing property rights.

Elaborating on the potential explanations for the failure of commercial banks' to increase lending to titled property owners, the authors note that:

Use of titles to securitize loans may fail in impoverished settings because transaction cost involved -- such as those associated with collateral processing, foreclosure and resale -- are sizable compared with the average loan sought.  Such costs are even higher when political or legal factors impede repossession of property . . . . [O]ne reason that titling programs may fail to reduce credit constraints is because they unavoidably signal to lenders that a government prioritizes housing for the poor, and hence is more likely to side with borrowers in enforcing credit contracts.

I was struck by glass-is-half-empty tone of the Field and Torero study's conclusion (ending with "The growth implications of titling programs may be greatly overstated") and the slightly disappointed tone taken by the Economist article.  I think that the negativity is in large part a reaction against the boosterism of de Soto and others who have presented land titling as a panacea for poverty.  Of course simply giving title to people is not going to cause commercial banks to lend (as I'm sure de Soto would admit).  All of the property owners involved are very poor, and so are not high on the list of commercial lending institutions' desired clients.  Further, as Field and Torero note, banks aren't going to be impressed with title as security if foreclosure is prohibitively expensive or discouraged by the government.

All of this said, though, it is hard to look at these studies and come to the conclusion that land titling is anything other than a good thing.  The improved quality of life described in the Galiani and Schargrodsky study alone seems to make titling worth the effort.  Add to that some improvement both in access to credit and in reduced interest rates on loans made, and titling seems even better.  It's not going to eliminate poverty by itself, but it is a useful step in the right direction.

Image of slum housing in Jakarta, Indonesia, from our friends at Wikipedia Commons.  Sorry, they didn't have anything Latin American.

Listed below are links to weblogs that reference Property and Poverty:

Faith Rivers at Vermont is doing some interesting work on "heir's property" in South Carolina that might be of interest: http://www.vermontlaw.edu/media/emp_media_expertise_template.cfm?doc_id=1161
In the South, African American's were shut out of the white legal system up until fairly recently, and her work addresses this.

The Curse of Growth Club

The conversation about growth and poverty reduction is fraught with problems. Donors seem fixated on reducing poverty, and they insist that growth will do just that. The empirical evidence is mixed. Since growth is reckoned as increases in per capita GDP, and since poverty is usually reckoned as the number of people below some dollar level ($1.00, $2.00) we have the obvious problem of relying on two different sample frames to develop a single causal model. Poverty must be measured at the household and individual level, and it must be monitored over time. Poverty is, after all, a lagging economic indicator. As we know from many oil exporting countries (indeed any natural resource exporting countries), per capita GDP can rise dramatically yet still leave the vast majority of people in “poverty.” So much for any coherent causal structure there. Jobs reduce poverty, natural resource exports do not.

When the interest turns to titling and poverty reduction the empirical challenge is compounded. Notice that since poverty is the presence or absence of income, and title to a house has no immediate or obvious connection to changes in household income—only a paying job can do that—the quest for causal connections remains elusive.

Despite this, the mantra remains that titles will solve poverty. Or, put more cautiously, titling certainly can do no harm. I could list some harm that will result from such programs but will not stress that here. The central point, I believe, is that those of us who are rich can find a number of ways to mess with people’s lives in the smaller latitudes under cover that surely we are not doing any harm.

I insist that if we are going to mess with people’s lives we ought to do it ONLY when we are sure that the beneficial effects of that messing are so striking and apparent that those with whom we mess, and others who now wish to be messed with, will immediately beg us for more. My experience in Africa runs in the opposite direction. There, many people are begging us to stop imposing our institutional arrangements on them. The whole intellectualist/modernist assault on common property in Africa is but one example of this neo-colonial program. Because Garrett Hardin mistakenly declared some alleged “tragedy” about common property (of course he did not understand what he was claiming—as a biologist it would be expecting too much that he might actually come to grips with the concepts of property and property rights about which he acted so certain), the international donor community cannot wait to cram titles down the throat of villagers who wish simply to be left alone. A recent World Development Report declared, with faux veracity, that “Despite potentially large benefits from titling, there are challenges in urban and rural contexts [WDR, 2006, p. 165].” Since a few researchers in the World Bank have produced credible research that refutes this assertion, the question worth asking is how is it possible for the World Development Report to become a cheerleader for a policy imposition that its own research staff now wishes to discredit. Is donor involvement driven by modernist ideology, or does empirical research still count for something? Some of us have been recently pleased by the apparent death of the Washington Consensus. Do not be fooled for a minute. It seems to be impossible to kill off the Washington Consensus—it simply appears in a more subtle guise.