It’s Not About the Fox; Sometimes, It’s About the Whale 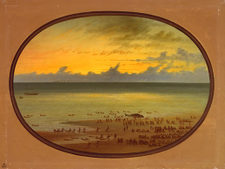 Last week, the ninety-one members of the 1L class at the University of Hawaii’s William S. Richardson School of Law were introduced to the law school ritual of briefing cases as part of their instruction in Legal Practice. Their first encounter was with Heppingstone v. Mammen, 2 Haw. 707 (1863), a delightful old case that is Hawaii’s answer to Pierson v. Post, discussed in several recent postings here at PPB. We try to expose our students to various aspects of Hawaii’s unique legal history, and Heppingstone is one of a dozen English and American cases decided from 1788 to 1881, see Annot., “Rights, Title, and Remedies of Hunter in Respect to Game Which he is Pursuing or has Killed or Wounded,” 49 A.L.R. 1498 (1927), that address the allocation of the ownership of captured whales between competing whaling vessels.

The case dates from a time when the courts of the independent Kingdom of Hawaii exercised admiralty jurisdiction to adjudicate disputes involving the numerous foreign vessels that called at its ports. John Heppingstone and John Mammen, masters of the whaling vessels Richmond and Oregon, respectively, disagreed over ownership of the proceeds of a bowhead whale taken in the Sea of Okhotsk, in the northwestern Pacific  Ocean. Boats from the Oregon sighted and pursued the whale late one afternoon; one boat was successful in harpooning the whale and making fast to it. The injured whale fled into nearby ice flows, however, and after two hours the whalers had to cut the line to save their boat. The whale disappeared, then reappeared and after considerable effort was again harpooned and made fast to Oregon’s boats. The whale again headed into the ice, however, and when nightfall found the Oregon with two of its boats stove in, one of the remaining boats cut its line to the whale in order to rescue men in the water and another boat’s harpoon came loose from the whale, leaving the now badly injured animal free to attempt its escape. Several hours after sunrise the next day, however, the men of the  Oregon again sighted the whale; to their chagrin, they observed that boats from another whaling vessel, the Richmond, were now actively pursuing it. The Oregon approached the Richmond and informed its master that the whale bore several of Oregon’s harpoons from the previous day’s hunt. The men of the Richmond ultimately killed the whale, and several of the Oregon’s harpoons were indeed recovered from its carcass. Captain Heppingstone of the Richmond then demanded half of the whale in recognition of his ship’s contribution to the capture, and the Oregon’s master refused.  Heppingstone then returned to the Richmond, declaring that he would seek a resolution to the matter when the vessels returned to Honolulu.

Justice Robertson of the Hawaii Supreme Court, sitting as a trial court, heard the case in Honolulu several months later. He took evidence from numerous witnesses regarding the facts of the case and also regarding the custom of the whaling industry as to the ownership of whales where one ship killed a whale that had been wounded by another. In deciding the case, he first rejected the English common law rule that gave exclusive ownership of animals ferae naturae to the person capturing them and nothing to mere pursuers (which would have favored the Richmond), declaring that it had “been modified to some extent, by the universal usage prevailing in the whaling business” and that the court would decide the case “according to equity and natural right.” He then opined that the whale would have been the exclusive property of the Oregon if the whale had died before the Richmond reached it if the Oregon had asserted (as it did) its right to the whale before the  Richmond had been begun stripping the whale’s carcass of blubber and whalebone. On the other hand, if the Richmond had killed the whale before the Oregon arrived to assert its claim, the Richmond would have prevailed. In the present case, however, where the Oregon had asserted its claim to the injured but as-yet unrestrained whale before the Richmond could make fast to it (and in fact the boats of the Oregon had participated in the chase on the second day), the court concluded that “according to equity and natural right” the Richmond would be required to give up half of the whale’s proceeds (“seventy-five barrels of good bowhead oil and one thousand pounds of whalebone, of at least medium size”) to the Oregon.

Reading Heppingstone caused me to look up similar cases from other jurisdictions, and it soon became apparent that there is a surprisingly rich literature discussing these obscure disputes in a dead industry. Most notably, as Tamara R. Piety describes in her recent law review article entitled “Something Fishy: Or Why I Make My Students Read Fast-Fish and Loose-Fish,” 29 Vermont L. Rev. 33 (2004), the resolution of such disputes among whalers was the subject of an entire chapter in Herman Melville’s Moby Dick. Melville’s statement of the applicable rule of law (as quoted by Piety) was: “I. A Fast-Fish belongs to the party fast to it. II. A Loose-Fish is fair game for anybody who can soonest catch it.” In other words, a whale made fast to a vessel (as by a line attached to a harpoon embedded in the whale) belonged to that vessel, while a whale not yet so secured belonged to the first vessel able to reduce it to possession. Robert C. Ellickson analyzed the body of case law applying this custom of the whaling industry in an article entitled “A Hypothesis of Wealth-Maximizing Norms: Evidence from the Whaling Industry,” 5 J. Law, Econ. & Org. 83 (1989), and again in his book, Order Without Law: How Neighbors Settle Disputes (1991). He noted that courts almost invariably deferred to the whalers’ custom in adjudicating these disputes, and also remarked that different rules might apply in different whaling regions. The “Fast-Fish/Loose-Fish” rule described by Melville was applied in Greenland waters where the right whale, or bowhead, was the main quarry. The geographical extent of the alternative rule of “iron holds the whale” (ownership went to the ship that first harpooned a whale, as long as it remained in fresh pursuit—it appears that the Heppingstone court, because of the unique facts of the case, effectively split the difference between the two rules) is unclear, but Ellickson suggested that it prevailed in waters where the sperm whale was hunted. Right and bowhead whales were less aggressive than sperm whales, and a boat could more safely make fast to them during the hunt. One did not want to remain too close to an angry sperm whale, on the other hand, and in any event the latter were more likely to be encountered in groups, which put a premium on harpooning several whales as quickly as possible without delaying the chase by taking time to make fast to them. Thus the applicable rule may have been tailored to maximize efficiency for the particular species of whale most likely to be encountered in a particular region.

Although these cases are old and obscure, they continue to be cited from time to time, both for their value in refining the Rule of Capture and as examples of the private ordering of rights in public resources through custom. The works of Piety and Ellickson have already been noted, and two of the whaling cases (including the most recent of them, Ghen v. Rich, 8 F. 159 (D. Mass. 1881) (adopting a version of the “iron holds the whale” rule in a case involving a fin-back whale)), were cited by the court adjudicating ownership of Barry Bonds’ record-setting home run baseball, Popov v. Hayashi, 2002 WL 31833731 (Cal. Superior Ct. 2002), and in several law review articles analyzing that decision (though Heppingstone was not cited by the Popov court, its “split the difference” result foreshadowed the result in the California case).

Ghen also made a cameo appearance in Gregory M. Duhl’s article “Property and Custom: Allocating Space in Public Places,” the subject of two recent comments in PPB and now available in print at 79 Temple L. Rev. 199 (2006). Duhl, following Ellickson, cites Ghen as an example of how, “in the absence of private property ownership, communities adopt and follow customs and norms to create and order property rights.” Duhl endorses these community-based standards and argues that “[s]tatutory and court-made law generally should not interfere with informal property regimes that reflect the customs of the communities in which they operate; and second, society should use positive and common law, when necessary, to protect those regimes.” Duhl recognizes, however, that there are limitations to this precept; in the case of the ranching community examined by Ellickson, Duhl argues that it is premature to recognize the ranchers’ preferred allocation of rights as the norm without consideration of other members of the community whose interests may have been opposed to those of the ranchers. “If a practice that effects or involves multiple constituencies within a community is observed only by one constituent group, it does not amount to a communitarian norm.”

The evidence from the whaling cases supports the need for caution in the endorsement of supposedly communitarian norms, and the need to look carefully at definition of the “community” whose interests are being determined. Ellickson himself noted the argument that “the whalers’ norms . . . were too short-sighted to be wealth maximizing,” and remarked that “[t]he nineteenth-century whalers in fact depleted their fisheries so rapidly that they were impelled to seek whales in ever more remote seas. Had they developed norms that set quotas on catches, or that protected young or female whales, they might have been able to keep whaling stocks at levels that would support sustainable yields.” The bowhead, right, and sperm whales that were so valuable to the nineteenth-century whaling industry are now commercially extinct, and their very survival is in doubt. While the whalers’ custom established an allocation of rights that may have been highly efficient and favorable to the community of whalers, it was part of a regulatory scheme that was all but fatal to the community of whales. This supports the view that a supposedly community-based” standard that fails to recognize the interests of all affected communities, or interests within a community, should be given considerable scrutiny before it is embraced as public policy.

The image is George Catlin's The Whale Ashore at Klahoqua, from the National Gallery of Art.

Carl C. Christensen
Comments are held for approval, so they will not appear immediately.

Listed below are links to weblogs that reference It’s Not About the Fox; Sometimes, It’s About the Whale:

» Whales and Foxes from The Fire of Genius
A fantastic! post today from Carl Christensen, at PropertyProf Blog, about the Rule of Capture as applied to whales.  Check it out! ... [Read More]

Hey, where did you get the thumbnail picture of Catlin's The Whale Ashore at Klahoqua?

Hmm, the endnote says that it came from the National Gallery. However, I can't find it on their website.