Posner on Murphy on Douglas 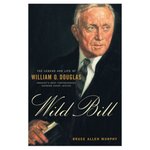 I just read Judge Posner's review of Bruce Allen Murphy's biography of William O. Douglas.  Because legal history is my other area of work, I thought I'd post a link to it.  As Eugene Volokh (the person who pointed me to it) says, "it's certainly a fun and interesting read."  I agree with that.  But I'm not so sure I agree with the rest of Volokh's statement "my sense is that the criticisms of Douglas, from what I've heard, are indeed quite apt."  (Unless by apt he means accurate even if they present an incomplete picture.)  Much of the review (like the book) is about Douglas' personal life.  Of course, Douglas' substantial lies in his memoirs come in for particular examination (which, by the way, we've known about since at least G. Edward White's American Judicial Tradition.)

What I thought about when reading the review is how much Douglas may have been creating a fictional life in his autobiography not because he deluded himself about his history, but rather because he believed in the American legend of individualism and wanted to contribute further to that legend.  Perhaps Douglas had in mind a sort of twentieth-century version of Benjamin Franklin's Autobiography.   That is, Douglas knew he was embellishing, but it may have been for a worthy purpose.  (Then again it may have been solely to satisfy his ego.)

UPDATE:  As Eugene Volokh points out, Scot Powe (a brilliant legal historian at the University of Texas, BTW) took apart many of Murphy's criticism of Douglas in an essay in Reviews in American History.  Gives new credence to the memoirs as twentieth-century version of Ben Franklin's Autobiography.

Listed below are links to weblogs that reference Posner on Murphy on Douglas: