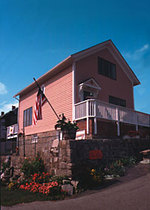 Over at blackprof, Emma Coleman Jordan has some important questions about Justice Thomas' dissent in Kelo.  Here's part sample of Professor Jordan's post:

[Justice Thomas] begins his analysis with an originalist interpretation of the “public purpose” clause of the Fifth Amendment, concluding that the majority has done violence to the original or “natural” meaning of the word “public use”.  His second line of argument is based on the instrumental consequence that urban redevelopment has disproportionately affected blacks, noting that “urban renewal came to be known as ‘Negro Removal’.  Thomas argues that:

In the 1950’s, cities “rushed to draw plans” for downtown development. “Of all the families displaced by urban renewal from 1949 through 1963, 63 percent of those whose race was known were nonwhite, and of these families, 56 percent of nonwhites and 38 percent of whites had incomes low enough to qualify for public housing, which, however, was seldom available to them.”. Public works projects in the 1950’s and 1960’s destroyed predominantly minority communities in St. Paul, Minnesota, and Baltimore, Maryland….. In 1981, urban planners in Detroit, Michigan, uprooted the largely “lower-income and elderly” Poletown neighborhood for the benefit of the General Motors Corporation.   Urban renewal projects have long been associated with the displacement of blacks; “[i]n cities across the country, urban renewal came to be known as ‘Negro removal.’  Over 97 percent of the individuals forcibly removed from their homes by the “slum-clearance” project upheld by this Court in Berman were black.. Regrettably, the predictable consequence of the Court’s decision will be to exacerbate these effects.

Porfessor Jordan then asks: "Is the Kelo dissent a principled deviation from Justice Thomas otherwise color blind jurisprudence, or is it an unprincipled effort to use race to support his conservative originalist interpretation of the Constitution?  What contribution does the Kelo dissent make in understanding Thomas’ views on race conscious remedies?"

I hope that you'll check out her complete post.  I, of course, am delighted whenever justices look to the impact their decisions as a way of gauging what they sought do (and have done).  For me, one of the many troubling aspects of Kelo (and Midkiff, too) is the displacement of people who are not in a position to mobilize political support.

Professor Jordan's post raises for me a question about the contrast between Thomas' dissent in Kelo and his dissent in Jones v. Flowers.  (See Ben's excellent discussion of Jones here.)  The later showed relatively little concern with people who might lose their property and receive no compensation.  In his Jones dissent, Justice Thomas focused on the likelihood of success of notice by certified mail; he did not (as he did in Kelo) look to the reality, which was that certified mail and notice by publication had failed to give Mr. Jones notice that his property was subject to sale for a tax lien.

Endnote: The photograph of Ms. Kelo's house is provided by the Institute of Justice.  They have asked that we include the following copyright notice: Photos by Isaac Reese, 2004 © Institute for Justice.

Listed below are links to weblogs that reference Justice Thomas' Dissents in Kelo and Jones v. Flowers: