How Progressives Rewrote the Constitution 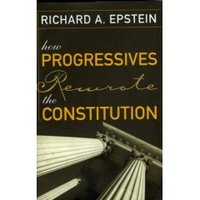 Been going through some books that have come in recently for review in Law and History Review.  One that property profs may want to put on their summer reading list is Richard Epstein's How Progressives Rewrote the Constitution, which has just appeared from Cato.

Some interesting stuff in here, including Epstein's introduction where he concedes that a lot of the New Deal state isn't going away.  Of course, Epstein would still like to see some constitutional changes:

Years ago, in my 1985 book Takings, I took the position that the standard interferences with employment contracts, such as minimum wage laws, antidiscrimination laws (in competitive markets only), collective bargaining laws, and Social Security requirements, were unconstitutional, all on the ground that the state has no better knowledge of what individuals need than individuals themselves do.  I stand unapologetically by those positions today and think that the invalidation of those programs rests not on some narrowly egotistical view of private property but on the correct social ground that this view does us more good in the long run than the endless creation of various "unfair" practices, such as those under modern labor law, that introduce various forms of state monopolies, each of which further saps the productive juices from American society.  At the same time, I fully recognize that the mistakes of the past, such as the creation of Social Security, cannot be undone today in light of the extensive reliance interest that have been created.  . . .  But that acceptance of change should never by confused with the mistaken belief that long usage of accepted doctrine renders it necessarily immune from rational criticism and constitutional change . . . .

In a concluding chapter, "Progressivism Today," Professor Esptein criticizes Kelo.  It's going to get a lot of attention.

And while I'm talking about Professor Epstein, I should mention that I think you'll enjoy James Ely's article The Impact of Richard A. Epstein, on Epstein's influence on property jurisprudence.  (Ben discussed the paper here.)  It's a wonderful essay, which gets at the marrow of intellectual and legal history: how do ideas shape how people think and behave?  I love it.  And perhaps I'll have a little time later this summer to talk about it.  It certainly deserves a read by property profs and legal historians.

Here's a link to a video of Professor Epstein's speech about the book to the Cato Institute.

Listed below are links to weblogs that reference How Progressives Rewrote the Constitution: