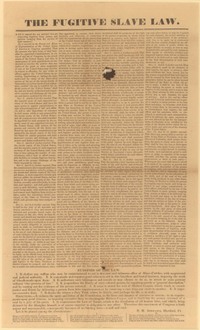 I'm back from the Southeastern Association of Law Schools (SEALS) conference.  Always good to see old friends and people whom I know from the blogosphere, as well as make new friends.  As to the blogosphere, Dan Solove, Paul Secunda, Steve Vladeck, Dan Markel, Ann Bartow, Ellen Podgor, and Peter Henning all spoke. And lots of propertyprofs, too, including Carol Brown, Mitch Crusto, Kali Murry and Alberto Lopez.  James Kelly presented his important new paper on Urban Communities, Eminent Domain, and the Socioeconomics of Just Compensation.  I'll have some thoughts on Kelly's paper next week.

I was on a panel on slavery, chaired by David Millon.  Jason A. Gillmer gave an important paper (which will be out in the North Carolina Law Review early next year) on a case of a slave accused of raping a white woman in Arkansas in the 1850s.  Check it out at bepress now.  The trend these days in legal history is often to micro-historical studies (like the Tulsa riot); it's always heartening to see how much insight one can wring from an intensive study of one case.  Gillmer's paper reminds me of one of my favorite books, Celia, A Slave, which I highly recommend to you, along with Jason's paper.

Adrienne Davis was, as always, brilliant.  This time she looked at the complexities of race, gender, and property from will cases involving white men who left property to formerly enslaved women.  Great, great stuff.  It's related to Adrienne's terrific article in the Stanford Law Review, "The Private Law of Race and Sex: An Antebellum Perspective" (abstract available here).  You ought to read it.  I cannot remember a finer article in legal history published in the last decade--and believe me, there have been a lot of contenders for that high praise.

I presented the first draft (version 1.0) of a paper on "The Fugitive Slave Act of 1850 in American Jurisprudence."  Where others have been interested in the antislavery response to the act (Robert Cover, for instance, was interested in how anti-slavery judges reacted and why so many abided the act), I'm interested in what the debates over the act say about main currents in jurisprudence, including

I began with a vignette from Uncle Tom's Cabin, of an Ohio state senator who argued against aiding fugitive slaves.  However, when confronted with Eliza and her child Harry, who were fleeing slavery in Kentucky, the senator helped them.  That's how Stowe set up the conflict between law and humanity.  I then use the act to talk about how considerations of the rule of law, utility, and history all combined to impede the process of reform (abolition).  The language that the legislators spoke correlates closely with that of many ministers and college professors and, especially, jurists.  And together I think those debates give a good picture of how the majority of antebellum Americans thought about issues of law and reform.  I think the debates can give us a good way of understanding the powerful forces that law reformers of any kind, not just abolitionists, were up against (to paraphrase David Brion Davis).  And how considerations of utility and historical evidence of inequality in human society combined to make it unlikely that judges would depart from precedent.  This is the flip side of the emergence of an "instrumental conception" among common law judges in the nineteenth century that Morton Horwitz talks in The Transformation of American Law, 1780-1860 (1977).  For these conceptions of law are about restraining--or distinctly limiting and channeling--legal change.  I talk some about this in relation to common law judging in "Reason and Sentiment: The Moral Worlds and Modes of Reasoning of Antebellum Jurists" in the Boston University Law Review back in 1999 and a little in this paper on antebellum literary addresses at the University of Alabama.

The highlight of the panel for me was the discussion; we actually had enough time to have a serious discussion with the audience--very enlightening.

Endnote: The image, the text of the Fugitive Slave Act, is from our friends at the Library of Congress.

Listed below are links to weblogs that reference Southeastern Association of Law Schools Conference: