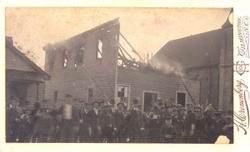 The Wilmington, North Carolina Riot Commission has issued its final report.  And it's getting a lot of attention, like this Washington Post article and Eric Muller's detailed discussion at Is that Legal?

The story of the riot's origins is important: it grew out of a controversy around the 1898 election and an anti-lynching editorial published by Alex Manly, editor of the local black newspaper, the Wilmington Record.  Then the black press was burned, which set off a wave of further violence.  (See picture, which appears in the riot commission report.)  It's testimony to the power of ideas that the riot began around the press, I think.  There's a lot of good work to be done on the explosive power of the ideas of what Ralph Ellison called "the great constitutional dream book"--ideas about equality and anti-lynching in the black community.  (Really small tidbits of some work I'm doing on this topic are here and here.  And there's some more in the first chapter of Reconstructing the Dreamland.  I hope in the not-too-distant future to have a monograph about this; it's tentatively titled Reading the Great Constitutional Dream Book.)

Propertyprof readers may be paritcularly interested in the riot because of the importance of geography.  Where people lived (and had there businesses) had a lot to do with where the violence was.  Unlike many other riots--East St. Louis in 1917, Chicago in 1919, and Tulsa in 1921 come to mind--Wilmington had some integration of housing and businesses.  Those of you who like maps will enjoy these, which depict residential segregation in 1897 and 1905.

Listed below are links to weblogs that reference Wilmington Riot of 1898:

Al, it's interesting to note that the commission's report somewhat downplays the role of Manly's newspaper, and argues that the events would probably have ensued even without the publication of the editorial.

Very interesting point, Eric. The Commission's report does say that it thinks the overthrow would have happened with or without Manly--and they may very well be correct. Of course, we'll never know. And I guess that's part of what makes history such an endlessly interesting field for work.

Figuring out what happened is very difficult and then interpreting it and deciphering the multitudes of "what might have beens" is even more difficult. Even the Commission's report emphasizes the centrality of Manly's editorial; and, of course, that the riot began at his press. I think that significant. As the Patriot Act has recently reminded us (because it authorizes investigations of which books library patrons borrowed), the books and newspapers that people read are important signifiers of their ideas. At least for the rioters in Wilmington, the newspaper press represented the flash-point in the violence. It might have happened without the press; but then again, perhaps the black community would not have represented such a threat without the press. Single causation theories are rightly suspect. But it's also very difficult to draw conclusions about what would have happened in the absence of the press. And given the evidence of where the riot began, I think it's a mistake to downplay too much the role of the press.

Google "1898 Wilmington Massacre" to view a Youtube video interview with Dr. Lewin Manly, Jr., Alex's manly's grandson, who favors compensation for the descendants of the victim's of the 1898 incident.