The Anti-Rent Era in New York Law and Politics 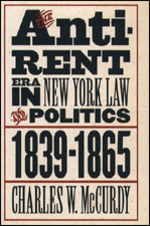 The anti-rent movement hasn’t received nearly the attention it deserves: it was a movement by “tenants”–-people on land in the Hudson River valley who owed permanent feudal quit rents–-against their patroons.  In the 1840s, the patroons became more serious about collecting the quit rents (annual payments or services) and particularly back-rents.  The tenants had little ability to pay and they refused.  This movement of little people against the wealthy quickly dissolved into violence.  And therein lies an important story about the intersection of popular constitutionalism, politics, and ideas about property.  The attempt to channel the dispute through the legal system and even the political system led, after the violence, to a stalemate between tenants and patroons.  The movement, which fit in odd ways with the antislavery movement, can help us understand political theory regarding respect for private property, as well as agitation against vested rights.  Shades of Hawaii Housing Authority v. Midkiff, eh?  In fact, one proposal in the New York legislature was to allow tenants to buy out their obligations through the state's eminent domain power.

McCurdy pays close attention to the political maneuvering in the legislature and to how legal decisions channeled potential political solutions.  It's a subtle exploration of an exceedingly complex topic.  Usually when people write about the anti-rent movement they pay attention only to one aspect--usually the ideological aspect--of the movement.  McCurdy shows how all the gears fit together.  It's a complex story, but it conveys the sense of how law and politics interact, to limit the opportunities for reform.  Ah, such is the complexity of life.

Propertyprof readers who're interested in the ideological aspects of the movement--the ideas about private property employed by the patroons and their supporters and the ideas about the tenants rights--might also enjoy reading James Fenimore Cooper's trilogy on the movement.  Cooper was, well, rather unfriendly towards the movement, but The Redskins and Satanstoe are interesting, if somewhat tedious reads.  (I haven't read The Chainbearer, the other book in the trilogy.)  Copper's story on the anti-rent movement, alas, ain't The Last of the Mohicans; or even Homes as Found, another of Cooper's important novels on law.

So check out McCurdy. It's state-of-the-art legal history and I think you'll learn a great deal from him about the interaction of law and politics in the nineteenth century.

Listed below are links to weblogs that reference The Anti-Rent Era in New York Law and Politics:

» Is this really the end of Feudalism? from PropertyProf Blog
Following up on my post on Robert Palmer's English Law in the Age of the Black Death, I thought I'd post a little more on feudalism. An island I’d never heard of, Sark, has just ended its “feudalism.” (Listen to [Read More]